I can assure you that this is NOT the only nation that does and has done these things. 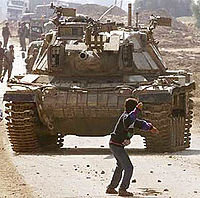 Fared Odeh, 14, possesses a world of courage and conviction that he must fight the illegal occupation that stole his homeland, his life, his family’s life, and the lives of millions of Palestinians. Tragically he was shot and killed by these cowardly soldiers who despite their tank feared a stone.

(Please do take the time to read this article and view the important Videos and photos included, With our own umanity and future at stake, Ignorance is no longer an option. Thank you)

“And then I watched the soldiers open fire. And it was I mean, I’ve seen kids shot in Sarajevo. I mean, snipers would shoot kids in Sarajevo. I’ve seen death squads kill families in Algeria or El Salvador. But I’d never seen soldiers (Israeli) bait or taunt (Palestinian) kids like this and then shoot them for sport.”
– Chris Hedges, Pulitzer Prize Journalist, in; “A Gaza Diary: Scenes from a Palestinian Uprising,” Harper’s magazine (October 2001).

1 thought on “The Only Nation That Systematically Arrests, Abuses, Tortures, Rapes, And Kills Children (Veterans Today)”