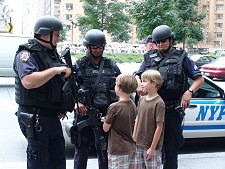 In November 2011, New York Mayor Michael Bloomberg told an audience at MIT, “I don’t listen to Washington very much, which is something they’re not thrilled about.” He didn’t listen because he didn’t have to. “I have my own army in the NYPD, which is the seventh biggest army in the world,” Bloomberg bragged. That boast–crude and alarming as it was–sort of just hung in the air, slowly losing its stench. Yesterday, Bloomberg revived it, this time while announcing that he didn’t want the Justice Department overseeing the NYPD in the event a federal judge deems stop-and-frisk unconstitutional.

The U.S. Department of Justice filed papers Wednesday saying that if a federal judge ruled the NYPD’s practices unconstitutional, then the DOJ would strongly endorse the use of a monitor to oversee changes at the department.

The mayor, however, said that the police department needs a clear line of authority. “No military organization or paramilitary runs where you have confusion in the command structure. You just cannot have that. Lives are on the line,” he said in a question-and-answer session with reporters.

Emphasis mine. The NYPD is not a “military organization” or an “army,” much less Bloomberg’s “own army.” Nor is the NYPD a “paramilitary organization”–that would require the department to change its core function to supporting an actual military. The NYPD is a police department. New York, New York is a city, not a sovereign nation. The 14th Amendment says Bloomberg and his police are required to respect the Fourth Amendment. This is basic stuff. You’d think Bloomberg would know it.

As for his claim that federal supervision of a police department that regularly violates the constitutional rights of New Yorkers “would create confusion in the command structure”? New York cops say there’s plenty of that already, thanks to their union working with commanding officers to create confusing and possibly illegal quotas for stopping, frisking, and arresting minority residents. In the event that a federal court deems stop-and-frisk unconstitutional, there will be that much more confusion at the NYPD. Bringing in an outside body–one tasked with making sure the department respects the constitutional rights of New Yorkers–would provide the department with a much needed moral compass.