In what may be the strangest story I have seen in a while related to the gold market, it appears $982 million worth of gold has left JFK international airport in New York to some undisclosed location in South Africa.  While it remains unclear what purpose this gold serves, it seems the most likely explanation is to fulfill demand for Krugerrands (South Africa’s popular gold bullion coin) to meet elevated demand in the face of constricted mine production.  This story is timely coming on the heels of the article I posted yesterday about how Dubai’s gold demand is running at 10x normal levels. This is a bizarre story, so if anyone has further color I’d love to hear it.

Examining US trade data, we were surprised to see that South Africa’s $402 million trade surplus with the United States in January had turned into a $689 million deficit by March. Why?

It turns out the $1.1 billion swing is entirely due to unusual shipments of gold from the US to South Africa in February and March. So far this year, 20,013 kg of unwrought gold, worth $982 million, has left John F. Kennedy International Airport (JFK), in New York, for somewhere in South Africa, according to the US Census Bureau’s foreign trade division. (Unwrought gold includes bars created from scrap as well as cast bars, but not bullion, jewelry, powder, or currency.)

The shipments from JFK were the only unwrought gold to leave the US for South Africa in 2013; another large shipment occurred in September 2012.

However, the strikes that rocked South Africa’s mining industry last year briefly caused gold output to fall sharply, around the same time as last autumn’s big gold shipment from JFK. Overall 2012 production declined by a relatively modest 6% (pdf) over the year before, according to a preliminary figure from the US Geological Survey; but those first estimates have sometimes proven wide of the mark. (In 2009 the USGS estimated South Africa’s 2008 production to be 250 tons; it subsequently revised the figure to 213 tons.) So it could be that the strikes dealt a more severe blow to the country’s gold industry than the data show.

Still, even if gold output did fall precipitously, it’s not clear why South Africa would need to start importing it. One possible destination for the gold is the South African Mint, which produces legal-to-own gold coins called Krugerrands; the gold used in them is first refined by the Rand refinery. Calls to the South African embassy in Washington, DC were not returned.

Meanwhile how about this chart, courtesy of the Quartz article. 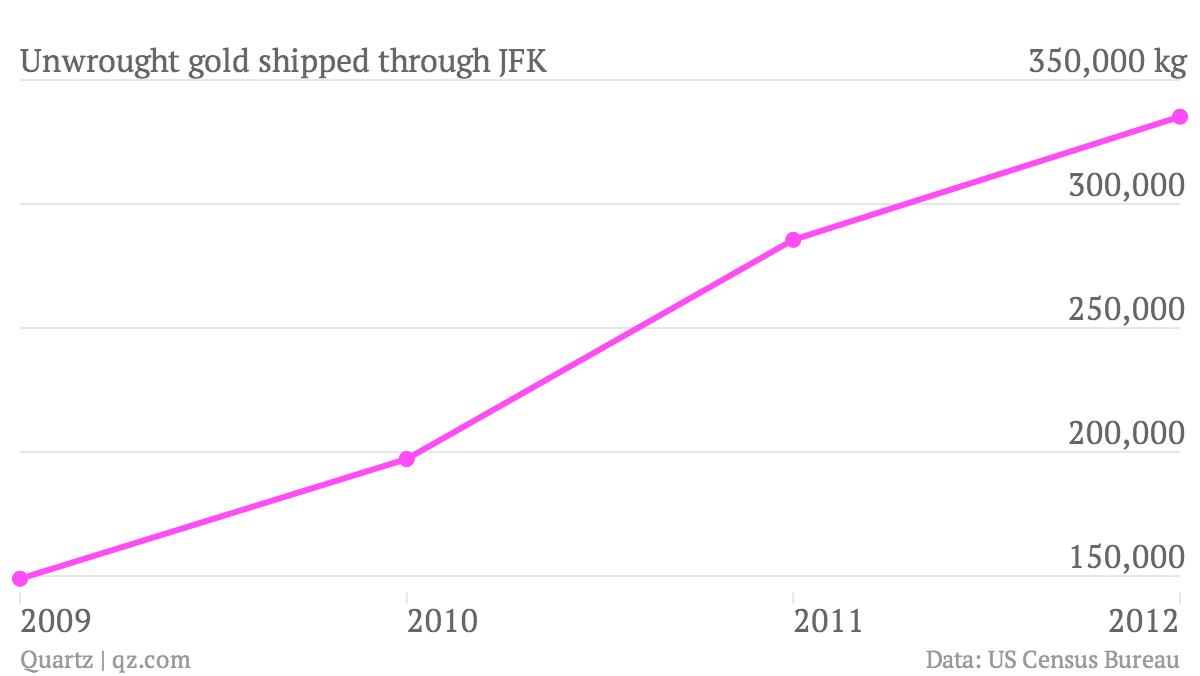 1 thought on “Why Has $1 Billion in Gold been Shipped from New York to South Africa?”