On The Forced Sale…

Via Ross Norman of Sharps Pixley,

The gold futures markets opened in New York on Friday 12th April to a monumental 3.4 million ounces (100 tonnes) of gold selling of the June futures contract in what proved to be only an opening shot. The selling took gold to the technically very important level of $1540 which was not only the low of 2012, it was also seen by many as the level which confirmed the ongoing bull run which dates back to 2000. In many traders minds it stood as a formidable support level… the line in the sand.

Two hours later the initial selling, rumoured to have been routed through Merrill Lynch’s floor team, by a rather more significant blast when the floor was hit by a further 10 million ounces of selling (300 tonnes) over the following 30 minutes of trading. This was clearly not a case of disappointed longs leaving the market – it had the hallmarks of a concerted ‘short sale’, which by driving prices sharply lower in a display of ‘shock & awe’ – would seek to gain further momentum by prompting others to also sell as their positions as they hit their maximum acceptable losses or so-called ‘stopped-out’ in market parlance – probably hidden the unimpeachable (?) $1540 level.

The selling was timed for optimal impact with New York at its most liquid, while key overseas gold markets including London were open and able feel the impact. The estimated 400 tonne of gold futures selling in total equates to 15% of annual gold mine production – too much for the market to readily absorb, especially with sentiment weak following gold’s non performance in the wake of Japanese QE, a nuclear threat from North Korea and weakening US economic data. The assault to the short side was essentially saying “you are long… and wrong”. 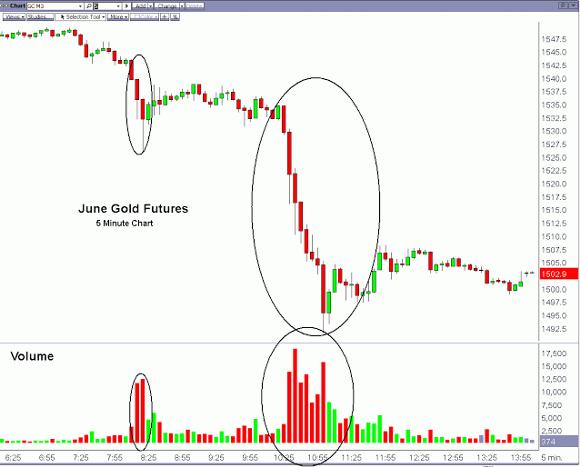 Futures trading is performed on a margined basis – that is to say you have to stump up about 5% of the actual cost of the gold itself making futures trades a highly geared ‘opportunity’ of about 20:1 – easy profit and also loss ! Futures trading is not a product for widows and orphans. The CME’s 10% reduction in the required gold margins in November 2012 from $9133/contract to just $7425/contract made the market more accessible to those wishing both to go long or as it transpired, to go short. Soon after we saw the first serious assault to the downside in Dec 2012, followed by further bouts in January 2013 – modest in size compared to the recent shorting but effective – it laid the ground for what was to follow. One fund in particular, based in Stamford Connecticut, was identified as the previous shorter of gold and has a history of being caught on the wrong side of the law on a few occasions. As baddies go – they fit the bill nicely.

The value of the 400 tonnes of gold sold is approximately $20 billion but because it is margined, this short bet would require them to stump up just $1b. The rationale for the trade was clear – excessively bullish forecasts by many banks in Q4 seemed unsupported by follow through buying. The modest short selling in Jan 2013 had prompted little response from the longs – raising questions about their real commitment. By forcing the market lower the Fund sought to prompt a cascade or avalanche of additional selling, proving the lie ; predictably some newswires were premature in announcing the death of the gold bull run doing, in effect, the dirty work of the shorters in driving the market lower still.

This now leaves the gold market in an interesting conundrum – the shorter is now nursing a large gold position and, like the longs also exposed – that is to say the market is polarised between longs and shorts and they cannot both be right. Either the gold bulls – like in a game of tug-of-war – pull back and prompt the shorters to panic and buy back – or they do nothing, in which case the endless stories about the “end of gold” will see a steady further erosion in prices. At the end of the day it is a question of who has got the biggest guns – the shorts have made their play – let’s see if there is any response from the longs to defend their position.

Via Mark O’Byrne of Goldcore,

Gold futures with a value of over 400 tonnes were sold in hours and this is equal to 15% of annual gold mine production. The scale of the selling was massive and again underlines how one or two large banks or hedge funds can completely distort the market by aggressive, concentrated leveraged short positions.

It may again be the case that bullion banks with large concentrated short positions are manipulating the price lower as has long been alleged by the Gold Anti Trust Action Committee (GATA). The motive would be both to profit and also to allow them to close out their significant short positions at more advantageous prices and possibly even go long in anticipation of higher prices in the coming weeks.

Those with concentrated short positions may also have been concerned about the significant decline in COMEX gold inventories.

The plunge in New York Comex’s gold inventories since February is a reflection of increased demand for the physical metal and concerns about counter party risk with some hedge funds and institutions choosing to own gold in less risky allocated accounts.

Comex gold bullion inventories have slumped 17% already in 2013, falling to just 286.6 metric tons of actual metal on April 11, the lowest since September 2009.

This means that futures speculators on Friday sold a significant amount of more paper gold, in an hour or two, then the entire COMEX physical gold bullion inventories.

Interestingly, the drop in Comex inventories would be the biggest for a whole year since 2001, when bullion began its secular bull market.

Absolutely nothing has changed regarding the fundamentals of the gold market and bullion owners are advised to again focus on the long term and the vital diversification benefits of owning gold over the long term.

Although some Federal Reserve policy makers said that they probably will end their $85 billion monthly U.S. bond purchases sometime in 2013. The key word is ‘probably’ and it remains unlikely that the Federal Reserve will stop their debt monetisation programmes any time in 2013 or even in 2014.

Even if the Fed did end them, ultra loose monetary policies and negative real interest rates are set to continue as are competitive currency devaluations and currency wars – two other fundamental pillars supporting the precious metal markets.

Buyers are now presented with another very attractive buying opportunity. We always caution against trying to “catch a falling knife” and buyers should hold off until we get a few days of higher closes or a weekly higher close. Alternatively, they should consider dollar, pound or euro cost averaging into a position at these levels.

Sellers should consider holding off as if contemplating selling they may have missed their opportunity and if they have to sell they may be best placed holding off until prices bounce or recover. Sellers are now disadvantaged both in terms of price but also in terms of premiums that have spread on some physical bars such as one kilo bars.

In the course of gold’s bull market, vicious sell offs like this have often presaged material weakness in stock markets and this may occur again.

Gold’s ‘plunge’ is now headline news which is bullish from a contrarian perspective. Less informed money is again selling gold or proclaiming the end of gold’s bull market.

The smart money such as certain hedge fund managers, high net worth individuals, pension funds, family offices, institutions and creditor nation central banks and will see this vicious sell off as an absolute gift and will accumulate again on this dip.