Europe’s plan to lend money to Spain to heal some of its banks may not work because the government and the country’s lenders will in effect be propping each other up, Nobel Prize-winning economist Joseph Stiglitz said.

“It’s voodoo economics,” Stiglitz said in an interview on Friday, before the weekend deal to help Spain and its banks was sealed. “It is not going to work and it’s not working.”

[The same is true of every other nation.]

“Portugal cannot rescue Greece, Spain cannot rescue Portugal, Italy cannot rescue Spain (as is surely about to become all too abundantly clear), France cannot rescue Italy, but Germany can rescue France.” Or, the credit of the EFSF/ESM, if called upon to provide funds in large size, either calls upon the credit of Germany, or fails; i.e, it seems to us that it probably cannot fund to the extent needed to save the credit of one (and probably imminently two) countries that had hitherto been considered “too big so save” without joint and several guarantees.***

As Nouriel Roubini wrote in February:

[For] problems of that magnitude, there simply are not enough resources—governmental or super-sovereign—to go around.

As Roubini wrote in February:

“We have decided to socialize the private losses of the banking system.

Roubini believes that further attempts at intervention have only increased the magnitude of the problems with sovereign debt. He says, “Now you have a bunch of super sovereigns— the IMF, the EU, the eurozone—bailing out these sovereigns.”

Essentially, the super-sovereigns underwrite sovereign debt—increasing the scale and concentrating the problems.

Roubini characterizes super-sovereign intervention as merely kicking the can down the road.

He says wryly: “There’s not going to be anyone coming from Mars or the moon to bail out the IMF or the Eurozone.” [Others have made the same point.]

Indeed, population may be the biggest ponzi scheme of all. Specifically – as we’ve pointed out for years – rapidly-aging populations in the developed world will exert a big drag on the economy.

Half the world, including almost all the developed world, now is reproducing at below replacement level. A generation from now, according to United Nations Population Division projections, less than a quarter of the world’s women – most of them in Africa and south Asia – will be reproducing at above replacement rate. And those UN forecasts are probably on the high side, for reasons we’ll come to later.

And as the birth rate has plunged in developed nations, and the native-born population has begun to shrink and rapidly age, governments and business have sought to make up the numbers by importing people to prop up their economies. It’s all they know how to do, for our economic system is, at its base, a giant Ponzi scheme, dependent on ever more people producing and consuming ever more stuff.

But what happens if that all stops? What happens when you get an ageing, shrinking population that consumes less?

“The answer to that question is that we don’t know because it’s never happened before,” says Peter McDonald, professor of demography and director of the Australian Demographic and Social Research Institute at the Australian National University.

“Our growth is predicated on extra numbers… [and] more of our activity is going into city building and people servicing, which do not directly produce many goods that can be traded in overseas markets.

Half the world is facing the problem of low fertility, and Australia, with its massive program of importing people, is providing an extreme example of one approach to the conundrum.

In a nutshell, the problem is this: lower fertility rates mean older, less innovative and productive workforces. More importantly to the Ponzi economic order, older, stable or declining populations consume less. So growth requires either importing people, or exporting stuff, or a combination of the two. Orthodox economics simply can’t cope otherwise.

Europe as a whole has been reproducing at well below replacement rate for close to 40 years. The last period for which UN data showed Europe’s total fertility rate above the replacement rate was 1970-75.

Europe’s contemporary demographics give new meaning to the descriptor ‘the old world’. The continent’s average person is over 40 now. By 2050, if things continue on trend, the average European will be 45.7. If one takes the UN’s “low variant” projection, he/she will be over 50 years of age.

And the low variant now looks closer to the mark. Fertility rates had actually rebounded a little over recent years, the result of a bit of “catch-up” after a shift over several previous decades in which women delayed child-bearing. But the European recession has set fertility rates plunging again. 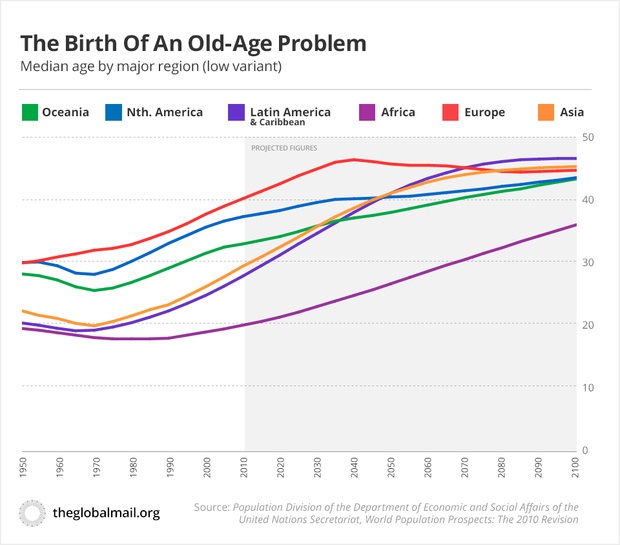 The recession’s effects will likely linger for decades, in lower rates of earnings and savings, and also in reduced fertility.

Last year, Forbes magazine, that most reliable voice of the economic orthodoxy, laid the blame for Europe’s economic decline squarely on its citizens’ failure to reproduce in adequate numbers, in an article headlined What’s Really Behind Europe’s Decline? It’s The Birth Rates, Stupid.

The Forbes piece was unequivocal: the biggest threat to the European Union was its low fertility rate.

The piece ended with a dire warning that unless Club Med managed to induce people to have more babies, catastrophic economic consequences would flow for all of Europe and maybe the world.

As Thomas Sobotka, one of the authors of a 2011 study on population trends by the Vienna Institute of Demography, told the Guardian newspaper, massive cuts in social spending would only exacerbate the problem.

“This may prolong the fertility impact of the recent recession well beyond its end. It could lead to a double-dip fertility decline,” he said.

But when it comes to fertility declines, Asia takes the cake.

Japan, Singapore, South Korea, Taiwan, Macau, Hong Kong, and most importantly China currently all have fertility rates lower than those of Europe.

China’s and Korea’s are about to start falling, if they haven’t already.

“I’m pretty pessimistic about the east-Asian situation,” says McDonald. “I think those countries find it very difficult move in the right direction of supporting work and family, in particular, reducing work hours.

“We are now talking about some 30 per cent of Japanese women not getting married.”

“I saw a couple of people from the Japanese government give a paper recently, essentially accepting this as an inevitability – a low birth rate forever,” he says.

It’s the same all over Asia.

Hong Kong has a birth rate of 1.09, which is on track to see its population almost halve in a generation. Taiwan is at 1.10; China, 1.55; Thailand, 1.66; Vietnam, 1.89. Even Indonesia’s fertility is just above replacement rate, at 2.23, and is falling fast. Malaysia and the Philippines are still growing pretty quickly, as are the south-Asian countries, which may give them a competitive edge for a few decades – and a growing export industry of people. But it is not projected to last more than a few decades.

Let’s return to America. The United States also is reproducing at below replacement rate, and its birthrate has declined sharply in recent years.

The US birth rate not only fell to its lowest level ever in 2011, but the greatest decline was among immigrant women.

In the longer term, the world will have to adjust its economic system to cope with the novel concept of less. Fewer people, less consumption, lowered need for resources, energy, housing, roads, you name it.

Indeed, smart curmudgeons like Jeremy Granthan and Chris Martensen think that we have not only “peak” demographics, but also peak resources.

The above is admittedly depressing. But the reality is that there’s hope.

We can have a very bright future, indeed … if we switch from the status quo to something smarter. For example, see this and this.

For example, we can cut out the middlemen in the banking and political realms … and prosper.

And as we’ve previously noted about energy:

The current paradigm is that energy is produced expensively by governments or large corporations through gigantic projects using enormous amounts of money, materials and manpower. Because energy can only be produced by the big boys, we the people must bow our heads to the powers-that-be. We must pay a lot of our hard-earned money to buy electricity from them, and we can’t question the methods or results of their energy production.

Our life will become much better when we begin to understand that energy is all around us – as an ocean of electromagnetic forces and as a byproduct of other processes in the form of heat, pressure, etc. – and all we need do is learn how to harvest it.