After reading this memo from the Central Bank of Cyprus sent to bank CEOs on February 11, arguably to put them at ease, all we can say is “Oooops”… 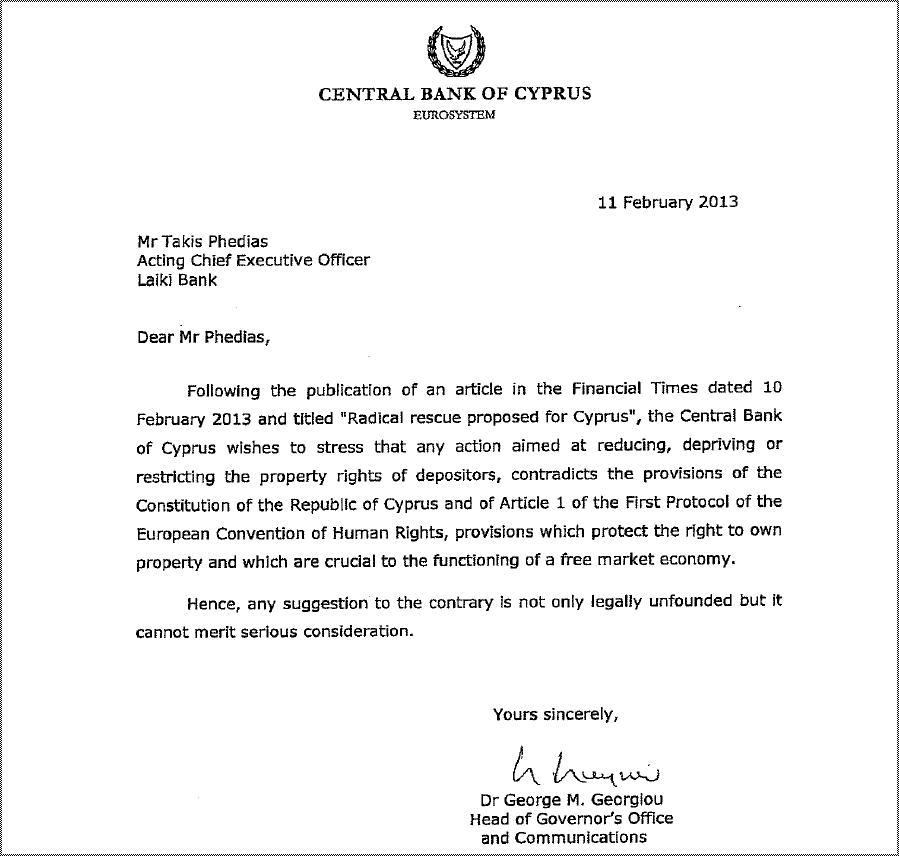 We’ll ignore the contents of the memo, including such statements that “restricting the property rights of depositors” is unconstitutional – that is after all for the people of Cyprus to opine on (we did however have a hearty laugh upon learning that there is a European Convention of Human Rights),

As for the FT article referenced? The following, from February 10, which references a “confidential memo” which foretold the events from two weeks ago with absolute precision :

A radical new option for the financial rescue of Cyprus would force losses on uninsured depositors in Cypriot banks, as well as investors in the country’s sovereign bonds, according to a confidential memorandum prepared ahead of Monday’s meeting of eurozone finance ministers.

The proposal for a “bail-in” of investors and depositors, and drastic shrinking of the Cypriot banking sector, is one of three options put forward as alternatives to a full-scale bailout. The ministers are trying to agree a rescue plan by March, to follow the presidential elections in Cyprus later this month.

By “bailing in” uninsured bank depositors, it would also involve more foreign investors, especially from Russia, some of whom have used Cyprus as a tax haven in recent years. That would answer criticism from Berlin in particular, where politicians are calling for more drastic action to stop the island being used for money laundering and tax evasion.

Labelled “strictly confidential” and distributed to eurozone officials last week, the memo says the radical version of the plan – including a “haircut” of 50 per cent on sovereign bonds – would shrink the Cypriot financial sector, now nearly eight times larger than the island’s economy, by about one-third by 2015.

Senior EU officials who have seen the document cautioned that imposing losses on bank depositors and a sovereign debt restructuring remain unlikely. Underlining the dissuasive language in the memo, they said that bailing in depositors was never considered in previous eurozone bailouts because of concern that it could lead to bank runs in other financially fragile countries.

So far the contagion has been mostly contained, courtesy of epic intervention on behalf of the BIS to keep the EUR stable for the past two weeks. Once again, we doubt this will persist.

At least at this point we know that a Cyprus sovereign debt haircut of 50%, which is noted on the memo as the missing piece to the “sustainability” puzzle, is next.

In the meantime, dear citizens of the world, please enjoy as your central bankers lie to you each and every day, and never forget that everything is under control.