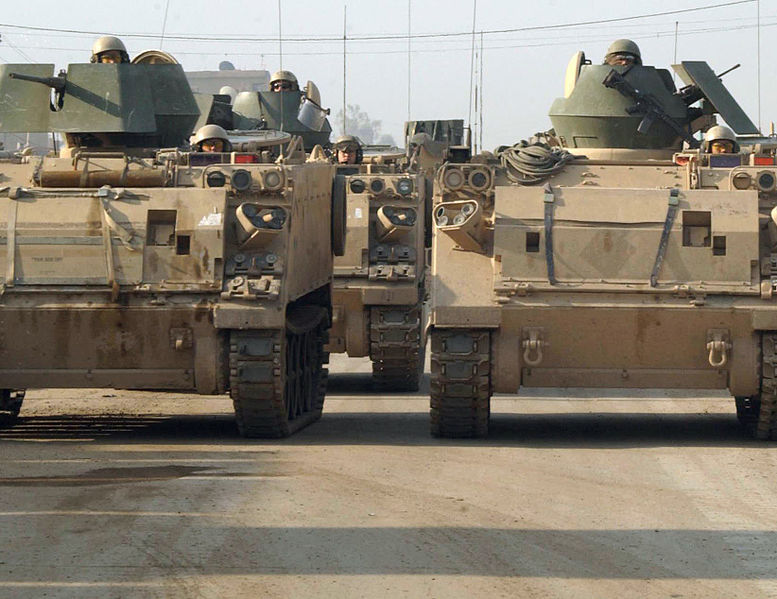 The Denver Post, on February 15th, ran an Associated Press article entitled Homeland Security aims to buy 1.6b rounds of ammo, so far to little notice.  It confirmed that the Department of Homeland Security has issued an open purchase order for 1.6 billion rounds of ammunition.  As reported elsewhere, some of this purchase order is for hollow-point rounds, forbidden by international law for use in war, along with a frightening amount specialized for snipers. Also reported elsewhere, at the height of the Iraq War the Army was expending less than 6 million rounds a month.  Therefore 1.6 billion rounds would be enough to sustain a hot war for 20+ years.  In America.

Add to this perplexing outré purchase of ammo, DHS now is showing off its acquisition of heavily armored personnel carriers, repatriated from the Iraqi and Afghani theaters of operation. As observed by “paramilblogger” Ken Jorgustin last September:

[T]he Department of Homeland Security is apparently taking delivery (apparently through the  Marine Corps Systems Command, Quantico VA, via the manufacturer – Navistar Defense LLC) of an undetermined number of the recently retrofitted 2,717 ‘Mine Resistant Protected’ MaxxPro MRAP vehicles for service on the streets of the United States.”

These MRAP’s ARE BEING SEEN ON U.S. STREETS all across America by verified observers with photos, videos, and descriptions.”

Regardless of the exact number of MRAP’s being delivered to DHS (and evidently some to POLICE via DHS, as has been observed), why would they need such over-the-top vehicles on U.S. streets to withstand IEDs, mine blasts, and 50 caliber hits to bullet-proof glass? In a war zone… yes, definitely. Let’s protect our men and women. On the streets of America… ?”

“They all have gun ports… Gun Ports? In the theater of war, yes. On the streets of America…?

Seriously, why would DHS need such a vehicle on our streets?”

Why indeed?  It is utterly inconceivable that Department of Homeland Security Secretary Janet Napolitano is planning a coup d’etat against President Obama, and the Congress, to install herself as Supreme Ruler of the United States of America.  There, however, are real signs that the Department bureaucrats are running amok.  About 20 years ago this columnist worked, for two years, in the U.S. Department of Energy’s general counsel’s office in its procurement and finance division.  And is wise to the ways.   The answer to “why would DHS need such a vehicle?” almost certainly is this:  it’s a cool toy and these (reportedly) million dollar toys are being recycled, without much of a impact on the DHS budget.  So… why not?

Why, indeed, should the federal government not be deploying armored personnel carriers and stockpiling enough ammo for a 20-year war in the homeland?  Because it’s wrong in every way.  President Obama has an opportunity, now, to live up to some of his rhetoric by helping the federal government set a noble example in a matter very close to his heart (and that of his Progressive base), one not inimical to the Bill of Rights: gun control.  The federal government can (for a nice change) begin practicing what it preaches by controlling itself.

Remember the Sequester?  The president is claiming its budget cuts will inconvenience travelers by squeezing essential services provided by the (opulently armed and stylishly uniformed) DHS.  Quality ammunition is not cheap.  (Of course, news reports that DHS is about to spend $50 million on new uniforms suggests a certain cavalier attitude toward government frugality.)

Spending money this way is beyond absurd well into perverse.  According to the AP story a DHS spokesperson justifies this acquisition to “help the government get a low price for a big purchase.” Peggy Dixon, spokeswoman for the Federal Law Enforcement Training Center:  “The training center and others like it run by the Homeland Security Department use as many as 15 million rounds every year, mostly on shooting ranges and in training exercises.”

At 15 million rounds (which, in itself, is pretty extraordinary and sounds more like fun target-shooting-at-taxpayer-expense than a sensible training exercise) … that’s a stockpile that would last DHS over a century.  To claim that it’s to “get a low price” for a ridiculously wasteful amount is an argument that could only fool a career civil servant.

Mr. Obama has a long history of disdain toward gun ownership.  According to Prof. John Lott, in Debacle, a book he co-authored with iconic conservative strategist Grover Norquist,

“When I was first introduced to Obama (when both worked at the University of Chicago Law School, where Lott was famous for his analysis of firearms possession), he said, ‘Oh, you’re the gun guy.’

’I don’t believe that people should own guns,’ Obama replied.

I then replied that it might be fun to have lunch and talk about that statement some time.

He simply grimaced and turned away. …

Mr. Obama?  Where’s the disdain now?  Cancelling, or at minimum, drastically scaling back — by 90% or even 99%, the DHS order for ammo, and its receipt and deployment of armored personnel carriers, would be a “fourfer.”

If Obama doesn’t show any leadership on this matter it’s an opportunity for Rep. Darrell Issa, chairman of the House Oversight and Government Reform Committee, and Rep. Michael McCaul, chairman of the House Committee on Homeland Security, to summon Secretary Napolitano over for a little national conversation. Madame Secretary?  Buying 1.6 billion rounds of ammo and deploying armored personnel carriers runs contrary, in every way, to what “homeland security” really means.  Discuss.