Kyle Bass, addressing Chicago Booth’s Initiative on Global Markets last week, clarified his thesis on Japan in great detail, but it was the Q&A that has roused great concern. “The AIG of the world is back – I have 27 year old kids selling me one-year jump risk on Japan for less than 1bp – $5bn at a time… and it is happening in size.” As he explains, the regulatory capital hit for the bank is zero (hence as great a return on capital as one can imagine) and “if the bell tolls at the end of the year, the 27-year-old kid gets a bonus… and if he blows the bank to smithereens, ugh, he got a paycheck all year.” Critically, the bank that he bought the ‘cheap options’ from recently called to ask if he would close the position – “that happened to me before,” he warns, “in 2007 right before mortgages cracked.” His single best investment idea for the next ten years is, “Sell JPY, Buy Gold, and go to sleep,” as he warns of the current situation in markets, “we are right back there! The brevity of financial memory is about two years.”

Click the image below for the full presentation (unembeddable): 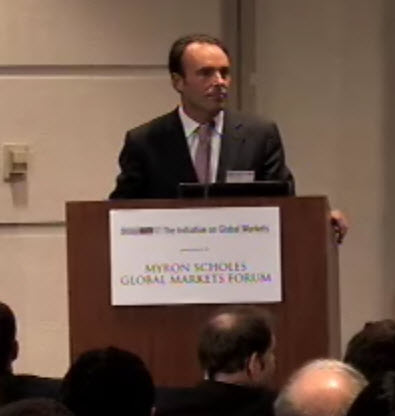 The main thrust of the discussion is Bass’ thesis on Japan’s pending collapse – which we wrote in detail on here, here, and here – and while the details of this thesis should prepare most for the worst, it is the Q&A that provides some very clear insights into just what is going on in the world.

Bass On Immigration Reform in Japan – hailed as a solution to the demographic problem – Bass says “Ain’t gonna happen. They need wage inflation and this will not encourage that. It’s an untenable situation.” Summing up his whole view on Japan – “I just don’t think it can be fixed.”

Question: When you look today in the capital markets at the tactical asymmetry that exists among the various financial instruments to take advantage of cheap optionality – what is that instrument?

I’ll give you guys a bit of an idea… we don’t talk about exactly what
we do – we tell you how much we love coke but we’re not gonna give you
the formula.

The AIG of the world is back – I have 27 year old kids selling me one-year jump risk on Japan for less than 1bp – $5bn at a time.

You know why? Because it’s outside of a 95% VaR, its less than one-year to maturity, so guess what the regulatory capital hit is for the bank… I’ll give you a clue – it rhymes with HERO…

If the bell tolls at the end of the year, the 27-year-old kid gets a bonus… and if he blows the bank to smithereens, ugh, he got a paycheck all year.

We are right back there! The brevity of financial memory is about two years.

I wouldn’t sell nuclear holocaust risk in Dallas for 1bp – you should be fired for thinking about selling something for less than 50bps.. and yet – this is happening again…

And it’s happening in huge size – huge – we bought half a trillion dollars worth of these ‘options’… and interestingly enough, one of the biggest banks in the world called me the other day and asked me if I would close my position – that was an interesting day for us – that happened to me in 2007 right before the mortgages cracked.

They said “we ran some new risk tests,” and I said “really?”

“Yeah, the new stress scenario is a little more punitive than the last one.”
“What is it?”
“Well, we don’t wanna share our proprietary secrets”
“Ok, then I am not closing it”,
and they said “woe woe woe.. in our old model rates stressed 50bps, in the new one they stress 400bps”
“Yeah, that would really hurt wouldn’t it”.
“Yeah, we’d like to close that one”
“I’d like to but I am not going to do that for you”…

The point is – Why would they run a stress test like that? They are starting to realize! Who would have them run that stress test. It’s happening again.

Question: Do you buy guns, gold, neither, or both?

If I am right, the social issues are going to be very difficult. I don’t think we devolve into anarchy and I do think the payment systems will continue to work but what they will pay with will be wumpum…

We will go thru a period where its a little tougher…

Question: Which one investment would make for the next ten years

I would buy Gold in JPY and go to sleep… Sell JPY, Buy Gold, Go to sleep, and wake up ten years later and you’ll be fine. Don’t put all yourr money in it but that is the single best investment you can make today.