– Fed Injects Record $100 Billion Cash Into Foreign Banks Operating In The US In Past Week (ZeroHedge, March 9, 2013):

Those who have been following our exclusive series of the Fed’s direct bailout of European banks (here, here, here and here), and, indirectly of Europe, will not be surprised at all to learn that in the week ended February 27, or the week in which Europe went into a however brief tailspin following the shocking defeat of Bersani in the Italian elections, and an even more shocking victory by Berlusconi and Grillo, leading to a political vacuum and a hung parliament, the Fed injected a record $99 billion of excess reserves into foreign banks. As the most recent H.8 statement makes very clear, soared from $836 billion to a near-record $936 billion, or a $99.3 billion reserve “reallocation” in the form of cash – very, very fungible cash – into foreign (read European) banks in one week. 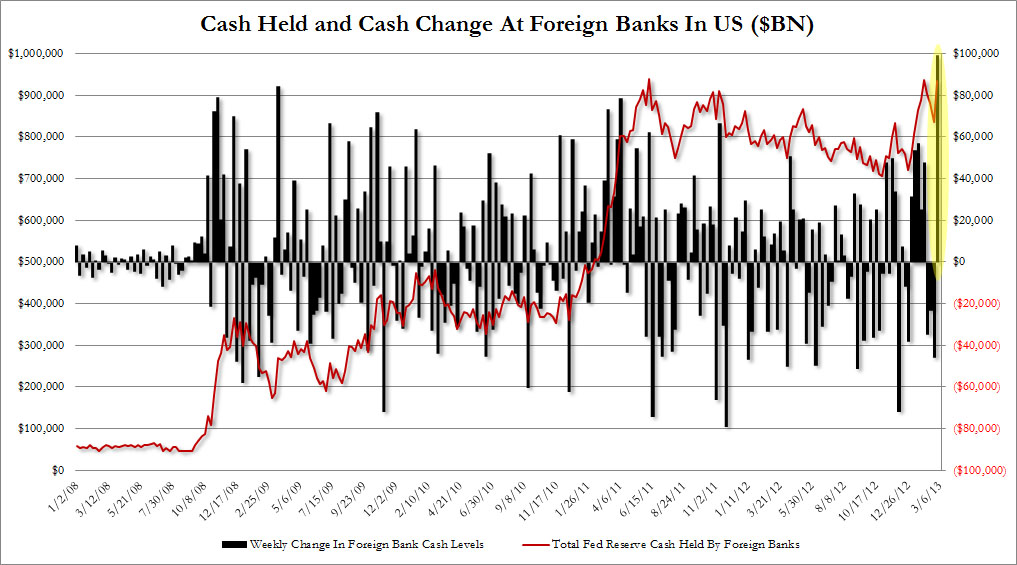 Furthermore, as we first showed, virtually all the “reserves” created by the Fed end up allocated as cash at commercial banks operating in the US: both domestically-chartered (small and large), but more importantly, foreign. And of the $1.884 trillion in very fungible cash parked in various domestic and international US banks, just half of it, or $949 billion is actually allocated to US banks. The other half, or $936 billion, is parked within, again, very fungible cash accounts of foreign (read European) banks operating in the US. This is shown in the chart below (green area is cash of foreign banks), and what is also shown is the total change in the Fed’s excess reserves, which proves, once more, that the Fed continues to fund European banks with hundreds of billions in cash on a week by week basis. And what is perhaps most important, is that of the $250 billion in new reserves created under QEternity, all of it has gone to foreign (read European) banks. 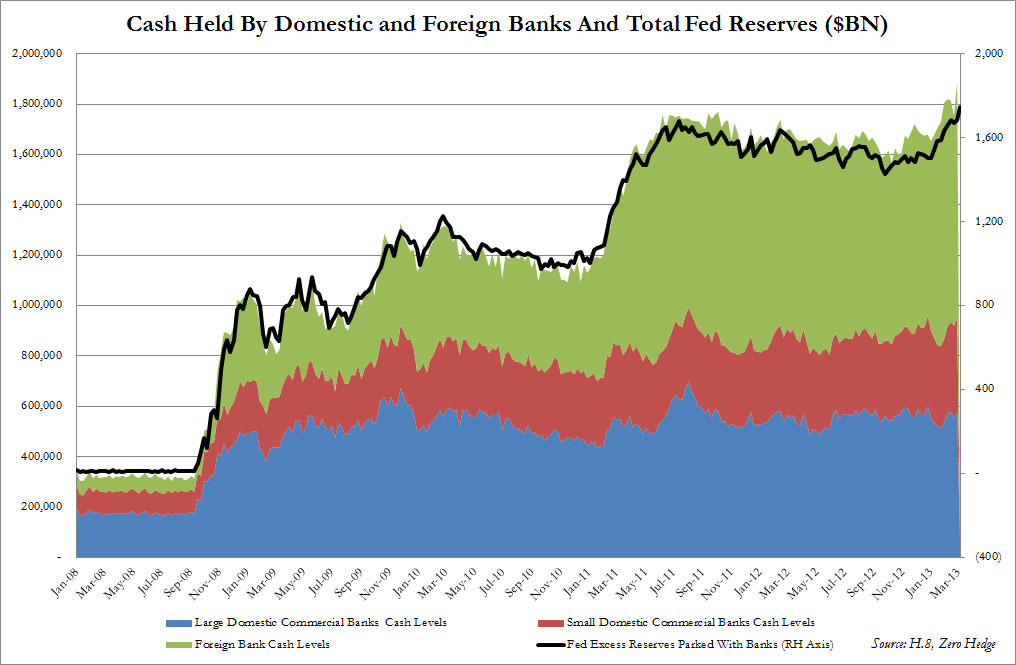 It may anger American to learn that by the time the Fed is done with QEternity (if ever), all of the newly created cash will have gone to mostly European banks. Because with every passing week, whatever new reserves are created by the Fed in exchange for monetizing the US deficit, end up as cash solely at European banks: a sad reality we have seen non-stop since the advent of QE2 when US bank cash balances remained relatively flat in the ~$800 billion range, and every incremental dollar went straight to Europe.

As a reminder, we don’t know how, via assorted shadow banking and other repo pathways, these banks manage to use said cash in other fungible activities. Recall that as we said, “So whether European banks will continue buying the EURUSD, or redirect their Fed-cash into purchasing the ES outright, or invest in other even riskier assets, remains unknown.” It is also unknown is the Fed’s reserves, reappearing as cash, and then siphoned over to European bank HoldCo via payables, is then used by, say, Italian and Spanish banks to purchase BTPs and Bonos, and give the impression that all is well. Because unlike before, keeping the EURUSD high is not as critical any more. But what is critical is to give the impression that Italian and Spanish sovereign risk is contained. And after all, let’s not forget that as of January, Italian bank holdings of Italy state bonds just hit a record of EUR200 billion.

Is it possible that the Fed, in all its generosity, transferred over several hundred billion over to these same Italian banks, courtesy of the cover provided by QE, so that the same Italian banks may monetize Italian bank bonds? And the same for Spain. Any wonder then that we got news of how flyingly great Spanish and Italian bond auction were in the past week?

After all, in Europe Germany has a heart attack whenever anyone perceives the ECB as monetizing, or even greenlighting the monetization of local sovereign bonds. But Germany has never said what it thinks about the Fed, indirectly, doing the same, using Italian and Spanish banks as conduits.

Finally, while we don’t know what the cash is being used for, we know that sooner or later, sometime around December 2013, when European, pardon, foreign bank holdings of US reserves, i.e., USD cash, hits well over $1.5 trillion, and when the Interest on Excess Reserves starts going up and the Fed is directly providing tens of billions in interest payment to European banks, some Americans may be angry to quite angry with that development.

But for now, everyone is blissfully unaware and even if they were, nobody cares. Why just look at the Dow Jones Industrial Average: how can one possibly allege that all is not well with the world…