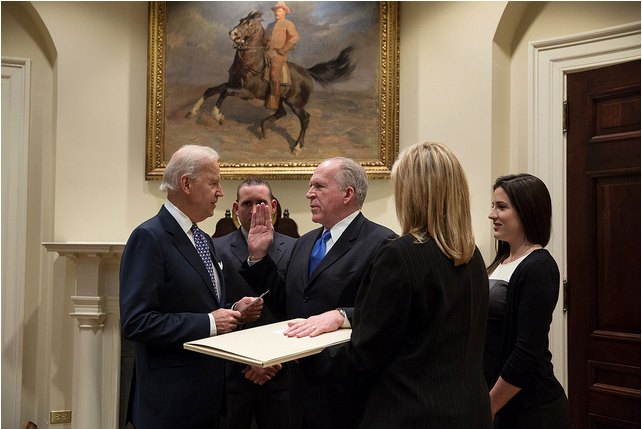 According to the White House, John Brennan was sworn in as CIA Director on a “first draft” of the Constitution including notations from George Washington, dating to 1787.

Vice President Joe Biden swears in CIA Director John Brennan in the Roosevelt Room of the White House, March 8, 2013. Members of Brennan’s family stand with him. Brennan was sworn in with his hand on an original draft of the Constitution, dating from 1787, which has George Washington’s personal handwriting and annotations on it.

I really don’t mean to be an asshole about this. But these vows always carry a great deal of symbolism. And whether he meant to invoke this symbolism or not, the moment at which Brennan took over the CIA happened to exclude (in symbolic form, though presumably not legally) the key limits on governmental power that protect American citizens.

Update: Olivier Knox describes how the White House pushed the symbolism of this.

Hours after CIA Director John Brennan took the oath of office – behind closed doors, far away from the press, perhaps befitting his status as America’s top spy – the White House took pains to emphasize the symbolism of the ceremony.

“There’s one piece of this that I wanted to note for you,” spokesman Josh Earnest told reporters gathered for their daily briefing. “Director Brennan was sworn in with his hand on an original draft of the Constitution that had George Washington’s personal handwriting and annotations on it, dating from 1787.”

Earnest said Brennan had asked for a document from the National Archives that would demonstrate the U.S. is a nation of laws.

“Director Brennan told the president that he made the request to the archives because he wanted to reaffirm his commitment to the rule of law as he took the oath of office as director of the CIA,” Earnest said.

Update: I’m assuming this copy of the Constitution is the one Brennan used.