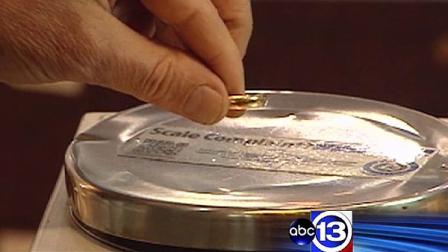 Next time you try to sell gold, silver or other precious metals in Houston you can expect to be fingerprinted and photographed.

HOUSTON (KTRK) — Next time you try to sell gold, silver or other precious metals you can expect to be fingerprinted and photographed.

The Houston City Council passed an ordinance meant to help track down criminals who try to resell stolen valuables. Gold-buying businesses will now be required to photograph and fingerprint sellers as well as photograph the items that are being sold to the dealer.

“It’s going to allow us the tools necessary to combat a lot of the high-end jewelry thefts that’s going on in the city, whether it’s robberies or burglaries,” said Houston Police Officer Rick Barajas.

A similar ordinance is already in place for scrap metal sellers and dealers.

Houston City Council on Wednesday passed new rules on precious metals dealers despite a lengthy attempt to water down the ordinance by Councilwoman Helena Brown, who called it “safety theater” that would burden businesses and invade jewelry sellers’ privacy.

Officers in the Houston Police Department’s precious metals unit said reputable dealers already implement many of the new rules but said the ordinance – which requires a photograph and thumbprint of each seller and mandates dealers enter transactions into an online database – will help them catch crooks and recover stolen goods.

Brown sought to remove criminal penalties for violating the ordinance, to allow dealers more flexibility in when and how to report transactions and to scrap the rule requiring sellers to have a photo and thumbprint taken. Each amendment was easily defeated.

“Why even ask the legal, law-abiding people to submit to this? It’s not going to prevent crime and it’s not going to solve any crimes,” Brown said. “It’s ludicrous. We’ve gone way beyond what our Founding Fathers envisioned for this nation.”

She paraphrased a quotation, which she attributed to Thomas Jefferson, saying those who would give up liberty for safety deserve neither.

Officers Rick Barajas and Todd Harris, of HPD’s precious metals unit, said they have spent a year on the ordinance, visiting 250 gold dealers and holding several stakeholder meetings. HPD formed the unit after noticing 4,800 burglaries of jewelry valued at more than $10,000 between July 2010 and June 2011; monetary losses in jewelry-related crimes doubled from 2007 to 2011 as prices rose, along with thieves’ interest.

One exchange between Brown and the officers got testy, and Brown later buttonholed Harris outside the chamber, but other council members were on board. Councilman Al Hoang said he had planned to vote against the new rules but was swayed by the officers’ explanations.

Mayor Annise Parker did not weigh in at length during Brown’s efforts, but did make an offhand comment.

“And for the record,” she said, “it was a Benjamin Franklin quote.”