– Henry Kissinger: ‘In 10 Years, There Will Be No More Israel’ 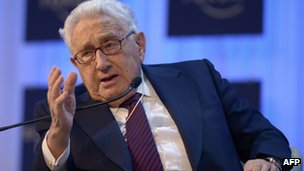 A nuclear war in the Middle East would be a “turning point in human history,” says Mr Kissinger

Former US Secretary of State Henry Kissinger has warned that a crisis involving a nuclear Iran is in the “foreseeable future”.

The Nobel Peace laureate, 89, was speaking about prospects in the Middle East at the World Economic Forum.

He said nuclear proliferation in the region triggered by an armed Iran would increase the chances of an atomic war – “a turning point in human history”.

He also urged the US and Russia to co-operate in resolving Syria’s conflict.

“There has emerged in the region, the current and most urgent issue of nuclear proliferation. For 15 years, the permanent members of the United Nations Security Council (UNSC) have declared that a nuclear Iran is unacceptable, but it has been approaching,” he said.

“In a few years, people will have to come to a determination of how to react, or the consequences of non-reaction.

“I believe this point will be reached in a very foreseeable future,” he added.

‘Nuclear war’In his assessment of the stand-off between Iran and Western powers over its nuclear programme – which Tehran argues is for peaceful and civilian purposes – Mr Kissinger called for “serious” negotiations on both sides to look for solutions.

“Unilateral intervention by Israel would be a desperate last resort, but the Iranians have to understand that if they keep using the negotiations to gain time to complete a nuclear programme then the situation will become extremely dangerous.”

The consequences of Tehran’s programme, he said, would be that other countries in the region would also want nuclear arms.

“The danger is that we could be reaching a point where nuclear weapons would become almost conventional, and there will be the possibility of a nuclear conflict at some point… that would be a turning point in human history,” he said.

“If Iran acts as a nation and not as a revolutionary cause, there is no reason for America or other permanent members of the UNSC to be in conflict with it, nor any countries in the region. On that basis I would hope that a negotiated solution would be found in a measurable time.”

Meanwhile, Mr Kissinger advocated a US-Russia understanding over the conflict in Syria, while opposing military intervention.

“The Syrian problem would best be dealt internationally by Russia and America not making it a contest of national interests,” he said.

“I would hope that the undertaking of the US foreign policy will not be be characterised by the divisions that we see in [its] domestic policy.”