Egyptian stocks cliff-dived by their most since the Arab Spring in January 2011 as Morsi’sreach-for-omnipotence sends concerned ripples through the nation that they have replaced ‘military fascism’ with so-called ‘islamofascism’. Tensions are rising once again in Tahrir Square, but as Russia Today notes in this clip, the new regime is somewhat more heavy-handed than the previous one in its control of protesters. Critically, the Musilm Brotherhood’s opposition forces, who have been quite divided recently, are joining to fight the common enemy as clashes between pro-Morsi and anti-Morsi forces are erupting. Perhaps just as worrisome as the social unrest is the fact that Egypt’s Stock Exchange Director Said Hisham Tawfiq fears “Egypt announces bankruptcy within 3 months in the case of the continuation of the current situation,” though we note Egypt CDS are near 16-month lows.

The EGX50 dropped a massive 9.5% today as markets are stunned my Morsi’s move… 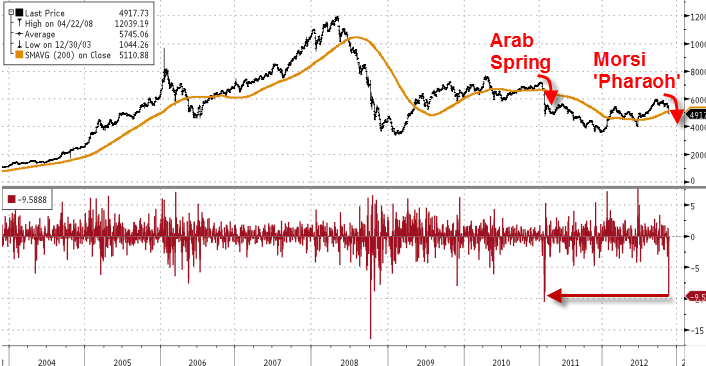 and from Russia Today: