With all bad news on the tape now having a suitable “explanation”, be it a prior president, a tropical storm, the weather being too hot, the weather being too cold, the weather being just right, but never, ever someone actually taking blame for the fact that life is what happens when corporate CEOs (and sovereign presidents) are busy making “priced to perfection” plans. So it is with what is now a confirmed flop of a Black Friday, which according to ShopperTrak saw sales drop by nearly 2% to $11.2 from 2011, which in turn was a 6.6% gain over 2010 (and would be revised to far lower once all the refunds and exchanges to cash took place in the two weeks later). This occurred despite a 3.5% increase in retail foot traffic to 307.7 million store visits. The nominal drop in retail sales also occurred despite a nearly 1% increase in the total US population over last Thanksgiving, and a 2% Y/Y inflation. But fear not: the ad hoc excuse for this “surprising” loss in purchasing power is already handy: it is all Black Thursday’s fault, or the latest idiotic attempt by retailers to cannibalize their own future sales by diluting the exclusivity of Black Friday, and which will force all retailers to follow the sovereigns in a race to the bottom, as soon every day will be the equivalent of Black Friday. But at least retailers have another 364 years worth of excuses for the conceivable future to excuse any and all store weakness. Next year: it’s all Black Wednesday’s fault.

Retailers have turned Black Friday, once a one-day event after Thanksgiving, into a week’s worth of deals and discounts. With the earlier openings, online deals starting as far back as last weekend and new promotions stores are offering to win return visits, shopping malls were less hectic on Black Friday this year, said Ramesh Swamy, an analyst at Deloitte LLP.

“Retailers are going to pace themselves and start rolling out different types of promotions to keep consumers interested,” Swamy said today in a telephone interview from Pasadena, California. Shoppers visiting stores this weekend are getting coupons that can be used starting next week or after Dec. 1 to lure them back, he said.

“This was a decent two days, and so that’s a good base and foundation for the rest of the holiday season,” Bill Martin, founder and executive vice president of ShopperTrak, said in a telephone interview today. “It will just take time see to see if consumers spent all their money or if they’ll take another bite of the apple as the season matures.”

What money? The 3.3% national savings rate which just happens to be the lowest in the past 3 years? 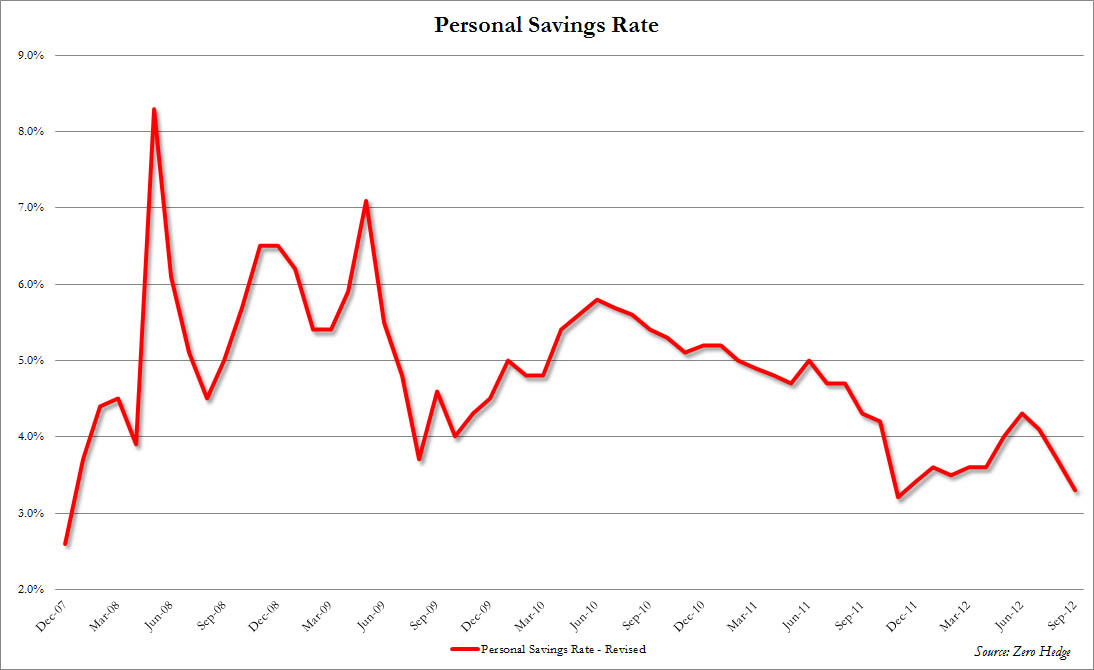 Unless by money ShopperTrak merely means to the largely synonymous: “tapped out credit cards.”

There is also hope that consumers are ignoring the fact that they simply don’t have disposable income, and have instead “charged it” online. “This is the year that mobile finally went mainstream,” Anuj Nayar, a PayPal spokesman, said in a telephone interview yesterday. Many people finished Thanksgiving meals and then shopped on their tablets or phones, he said.”

And while savings may have collapsed, disposable incomes non-existent, and average hourly wages rising at the lowest pace in… well ever, people still at least have their confidence.

Retailers had increasingly confident consumers visiting stores this weekend. More Americans this month said the U.S. economy will improve than at any time in the past decade, according to the Bloomberg Consumer Comfort Index. The share of households saying it would get better rose to 37 percent, the highest since March 2002. A year ago, the measure showed a record number of consumers said it was a bad time to spend.

Funny, because a couple of paragraphs lower in the same story, Bloomberg says this:

“There is a lot of belt-tightening by companies going on and people are still losing their jobs,” said Bettini, who with her husband, Randy, raises grapes, mushrooms and vegetables on a family farm. They also plan to give gift baskets with homemade cider. “People are trying to get by the best way they can.”

What is the confidence-USD exchange rate anyway, or hope-EUR? And how does that look priced in energy terms. Why energy?

“We’re encouraged by what we’re seeing out there,” Mark Breitbard, president of Gap Inc.’s North America division for its namesake brand, said in a telephone interview yesterday. “There’s a lot of energy in the malls right now, which is great.”

Let’s see here: “hope”, “confidence”, “consideration” and now “energy.” By the time the depression is over, everyone will be flat out broke, but at least everyone will know every possible synonym of “bullshit” imaginable.