After hours shots fired, with Moody’s hitting the long overdue one notch gong on France: 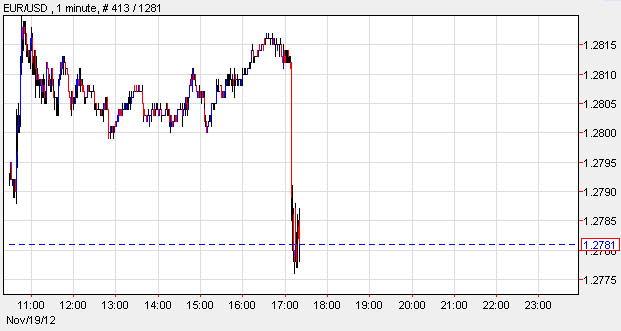 1.) France’s long-term economic growth outlook is negatively affected by multiple structural challenges, including its gradual, sustained loss of competitiveness and the long-standing rigidities of its labour, goods and service markets.

2.) France’s fiscal outlook is uncertain as a result of its deteriorating economic prospects, both in the short term due to subdued domestic and external demand, and in the longer term due to the structural rigidities noted above.

3.) The predictability of France’s resilience to future euro area shocks is diminishing in view of the rising risks to economic growth, fiscal performance and cost of funding. France’s exposure to peripheral Europe through its trade linkages and its banking system is disproportionately large, and its contingent obligations to support other euro area members have been increasing. Moreover, unlike other non-euro area sovereigns that carry similarly high ratings, France does not have access to a national central bank for the financing of its debt in the event of a market disruption.

The first driver underlying Moody’s one-notch downgrade of France’s sovereign rating is the risk to economic growth, and therefore to the government’s finances, posed by the country’s persistent structural economic challenges. These include the rigidities in labour and services markets, and low levels of innovation, which continue to drive France’s gradual but sustained loss of competitiveness and the gradual erosion of its export-oriented industrial base.

The rise in France’s real effective exchange rate in recent years contributes to this erosion of competitiveness, in particular relative to Germany, the UK and the US. The challenge of restoring price-competitiveness through wage moderation and cost containment is made more difficult by France’s membership of the monetary union, which removes the adjustment mechanism that the ability to devalue its own currency would provide.

Apart from elevated taxes and social contributions, the French labour market is characterised by a high degree of segmentation as a result of significant employment protection legislation for permanent contracts. While notice periods and severance payments are not significantly higher than they are in other European countries, some parts of this legislation make dismissals particularly difficult. This judicial uncertainty raises the implicit cost of labour and creates disincentives to hire. In addition, the definition of economic dismissal in France rules out its use to improve a firm’s competitiveness and profitability.

Moreover, the regulation of the services market remains more restrictive in France than it is in many other countries, as reflected in the OECD Indicators of Product Market Regulation. The subdued competition in the services sector also has a negative effect on the purchasing power of households and the input costs of enterprises. France additionally faces significant non-price competitiveness issues that stem from low R&D intensity compared to other EU countries.

Moody’s recognises that the government recently announced measures intended to address some of these structural challenges. However, those measures alone are unlikely to be sufficiently far-reaching to restore competitiveness, and Moody’s notes that the track record of successive French governments in effecting such measures over the past two decades has been poor.

The second driver of today’s rating action is the elevated uncertainty with respect to France’s fiscal outlook. Moody’s acknowledges that the government’s budget forecasts target a reduction in the headline deficit to 0.3% of GDP by 2017 and a balancing of the structural deficit by 2016. However, the rating agency considers the GDP growth assumptions of 0.8% in 2013 and 2.0% from 2014 onwards to be overly optimistic. On top of rising unemployment, France’s consumption levels are being weighed down by tax increases, subdued disposable income growth and a correction in the housing market. Net exports are unlikely to drive economic activity in light of reduced external demand, in particular from euro area trading partners such as Italy and Spain.

The third rating driver of Moody’s downgrade of France’s sovereign rating is the diminishing predictability of the country’s resilience to future euro area shocks in view of the rising risks to economic growth, fiscal performance and cost of funding. In this context, France is disproportionately exposed to peripheral European countries such as Italy through its trade linkages and its banking system.

Moody’s notes that French banks have sizable exposures to some weaker euro area countries. As a result, despite their good loss-absorption capacity, French banks remain vulnerable to a further deepening of the crisis due to these exposures and their significant — albeit reduced — reliance on wholesale market funding. This vulnerability adds to the government’s contingent liabilities arising from the French banking system.

Moreover, France’s credit exposure to the euro area debt crisis has been growing due to the increased amount of euro area resources that may be made available to support troubled sovereigns and banks through the European Financial Stability Facility (EFSF), the European Stability Mechanism (ESM) and the facilities put in place by the European Central Bank (ECB). At the same time, in case of need, France — like other large and highly rated euro area member states — may not benefit from these support mechanisms to the same extent, given that these resources might have already been exhausted by then.

In light of the liquidity risks and banking sector risks in non-core countries, Moody’s perceives an elevated risk that at least part of the contingent liabilities that relate to the support of non-core euro area countries may actually crystallise for France. The risk that greater collective support will be required for weaker euro area sovereigns has been rising, most for notably Spain, whose economy and government bond market are around twice the combined size of those of Greece, Portugal and Ireland. Highly rated member states like France are likely to bear a disproportionately large share of this burden given their greater ability to absorb the associated costs.

More generally, further shocks to sovereign and bank credit markets would further undermine financial and economic stability in France as well as in other euro area countries. The impact of such shocks would be expected to be felt disproportionately by more highly indebted governments such as France, and further accentuate the fiscal and structural economic pressures noted above. While the French government’s debt service costs have been largely contained to date, Moody’s would not expect this to remain the case in the event of a further shock. A rise in debt service costs would further increase the pressure on the finances of the French government, which, unlike other non-euro area sovereigns that carry similarly high ratings, does not have access to a national central bank that could assist with the financing of its debt in the event of a market disruption.

Today’s rating action on France’s government bond rating was limited to one notch given (i) the country’s large and diversified economy, which  underpins France’s economic resiliency, and (ii) the government’s commitment to structural reforms and fiscal consolidation. The limited magnitude of today’s rating action also reflects an acknowledgment by Moody’s of the French government’s ongoing work on a reform programme to improve the country’s competitiveness and long-term growth perspectives, with key measures expected to be outlined in the National Pact for Growth, Competitiveness and Employment. Moreover, on the fiscal side, the European Treaty on the Stability, Coordination and Governance of the Economic and Monetary Union (TSCG), known as the “fiscal compact”, will be implemented through the Organic Law on Public Finance Planning and Governance.

Moody’s decision to maintain a negative outlook on France’s government bond rating reflects the weak macroeconomic environment, and the rating agency’s view that the risks to the implementation of the government’s planned reforms remain substantial. Moreover, Moody’s currently also holds negative outlooks on those Aaa-rated euro area sovereigns whose balance sheets are expected to bear the main financial burden of support via the operations of the EFSF, the ESM and the ECB. Apart from France, these countries comprise Germany (Aaa negative), the Netherlands (Aaa negative) and Austria (Aaa negative).

WHAT COULD MOVE THE RATING UP/DOWN

Given the current negative outlook on France’s sovereign rating, an upgrade is unlikely over the medium term. However, Moody’s would consider changing the outlook on France’s sovereign rating to stable in the event of a successful implementation of economic reforms and fiscal measures that effectively strengthen the growth prospects of the French economy and the government’s balance sheet. Upward pressure on France’s rating could also result from a significant improvement in the government’s public finances, accompanied by a reversal in the upward trajectory in public debt.