“It is especially disturbing to see that there are many hot spots around playground equipment, exposing children who are most vulnerable to radiation risks,”a Greenpeace scientist said in October.

– Fukushima: Child Has So Many Thyroid Cysts, Doctor Can’t Count Them – Hospital Told NOT To Test Children

– CONFIRMED: 36 Percent Of Fukushima Kids Have Abnormal Thyroid Growths And Doctors Are In The Dark

– All 3 Children In Family 100 Km Away From Fukushima Nuclear Plant Have Thyroids Cysts, Mother Suffers From Thyroid Abnormality And Gets Tired Easily

– Thyroid Nodules Rate 20 Times Higher In Fukushima Than In Chernobyl

Yet giving those children iodine tablets directly after the Fukushima disaster happened and mandatory evacuation would have worked.

Sounds like ‘somebody’ is intentionally sacrificing all those children and is feeding them more BS propaganda. 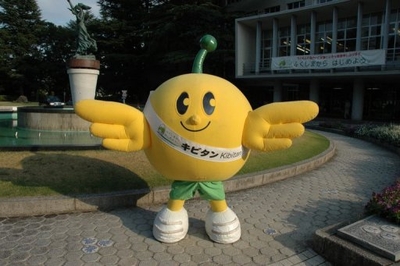 TOKYO (AFP) – A grinning bird mascot has been enlisted to teach Japanese children in Fukushima how to stay safe from the radiation that escaped from the region’s crippled nuclear power plant.

Kibitan — a plump, yellow cartoon character with stubby wings and boots — is warning youngsters to stay away from puddles and ditches, where radioactive particles accumulate.

In a leaflet issued by Fukushima’s disaster taskforce, the character, inspired by the region’s narcissus flycatcher bird, asks children to promise they will wash their hands and gargle with water when they get home.

A smiling Kibitan explains what radiation is and cautions that it can make people sick if it gets inside their body.

Tens of thousands of people were evacuated from their homes around Fukushima Daiichi nuclear plant in the weeks after it was wrecked by the massive tsunami that hit Japan in March 2011.

But anti-nuclear campaigners say the Japanese government has not done enough to protect those living a little further afield.

“It is especially disturbing to see that there are many hot spots around playground equipment, exposing children who are most vulnerable to radiation risks,” a Greenpeace scientist said in October.

On Thursday the government admitted that some radiation measurements were inaccurate, saying devices at 675 locations in and around Fukushima were under-reporting levels by around 10 percent, Kyodo News agency reported.

Reactor meltdowns in the days after the earthquake-sparked tsunami spread radiation over a wide area and left swathes of agricultural land unfarmable.

The natural disaster left around 19,000 people dead or missing, while no one is officially recorded as having died as a direct result of the nuclear catastrophe.

Scientists caution that decommissioning the plant and making some areas habitable could take decades.

Kibitan was designed in 1995 to mark an athletics meet in Fukushima and has been used as a local mascot ever since.