With government bond markets increasingly manipulated directly via central-bank intervention – and becoming increasingly illiquid – the odd situation we find ourselves in once again is that CDS markets perhaps provide a ‘cleaner’ picture of where credit risk is actually being traded between market participants (hedgers or speculators). To wit, Bloomberg’s ever-insightful Michael McDonough has noticed a significant divergence between market-implied perceptions of risk (CDS) and ratings-agencies perceptions among several nations. Most notably France and Italy (with Belgium close behind) appear considerably ‘over-rated’. Italy’s implied rating is equivalent to BB+ at S&P – well below its average rating of BBB+ and France’s implied rating of A is around four notches below its composite rating. Spain also appears set for more pain as its market price implies a sub-investment grade rating is imminent. 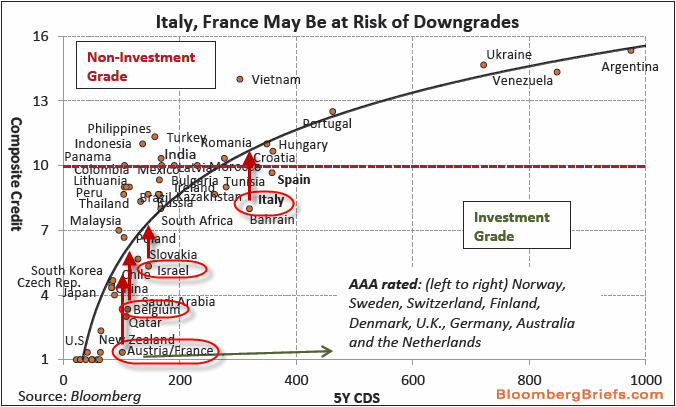 On the bright side – maybe Vietnam is due for an upgrade?