When we reported on the 34th consecutive month of Greek unemployment increases, following the June number hitting a record high 24.4%, the only good news was that the May number had been revised higher from 23.1% to 23.5%, making the monthly jump seem just under 1%. Well, that revision was re-revised, with Greek Statistic Service ELSTAT reporting that the original 24.4% number has now been revised to 24.8%, meaning in June unemployment rose officially by 1.3%. That’s in one month! ELSTAT also reported the July number, and at 25.1% (pre-revision higher next month), it just hit a new all time high, increasing for the 35th month in a row. More than one quarter of those eligible for work in Greece (not many), are working. THis means labor related taxes are now being levied on a record low percentage of the population. Indicatively, Greek unemployment at the end of 2011 was “only” 21.2%. It also means that in order to restore even a tiny iota of confidence, the Greek labor department needs to hire a BLS consultant or two, or least license an old version of the ARIMA goalseek software, to find a seasonally adjusted decimal comma in there somewhere, and report that the jobless rate is really only 2.5%, which would be on par in credibility with everything else out of Europe these days. Finally, our question is at what point does anyone finally admit the Greek situation is not only a depression but outright economic death and the merciful thing to do at this point is to just pull the plug? 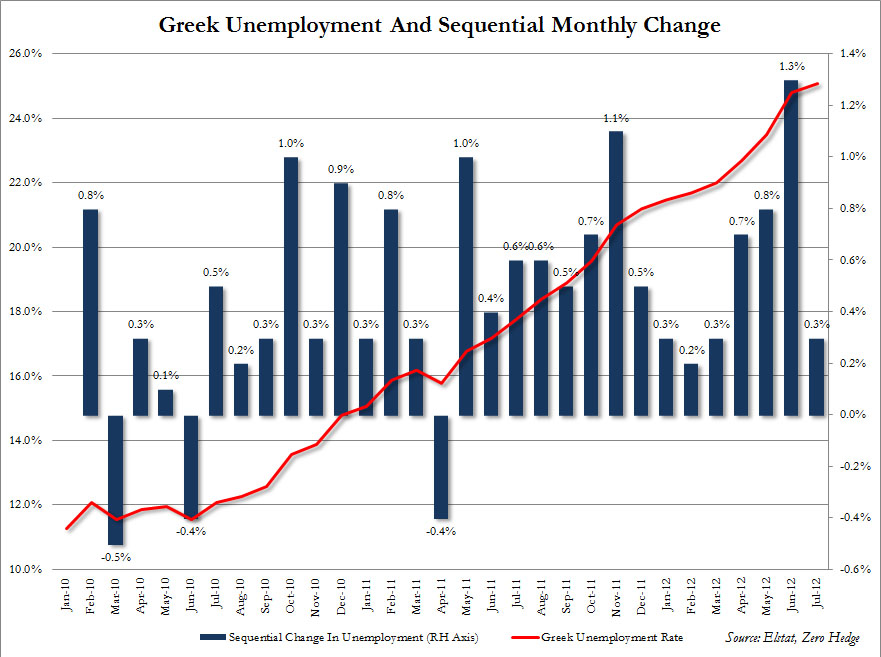