Brace yourself for some painful “agflation”. That is the shorthand for agricultural commodity inflation, otherwise known as rising food prices. 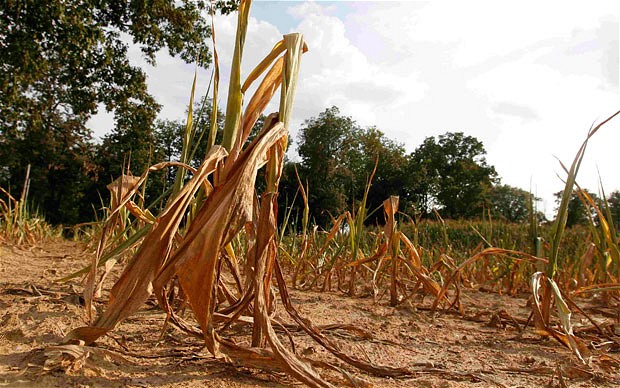 Rabobank thinks the consumer impact could be less painful this time around compared to 2008, when there were severe shortages of wheat and rice. That is because today’s shortages are being seen more in crops used as animal feed, such as corn and soybeans. Photo: Reuters

They are being driven upwards by the climb in grain and oilseed prices as US crops weather the country’s worst drought since 1936, while the farming belts of Russia and South America suffer through similar water shortages.

What we are seeing represents the third major rally in global grain and oilseed prices in just half a decade.

Worse is to come, new research warns. World food prices look set to hit an all-time high in the first quarter of next year – and then keep rising, according to the analysis from Rabobank, a specialist in agricultural commodities.

By June 2013, the basket of food prices tracked by the United Nations could climb 15pc from current levels, according to the bank’s analysts.

“The coming year will see the world economy re-enter a period of agflation as grain and oilseed stocks decline to critically low levels, pushing the FAO [Food and Agricultural Organisation] Food Price Index above record nominal highs set in February 2011,” they say.

The index offers a useful proxy for the prices paid by world consumers for food, they note – indicating how agricultural commodity price movements are likely to translate into prices of shop shelves.

For policy-makers, the pick up in food inflation signals problems, as high food prices tend to magnify social unrest.

“Politics and economics are inextricably linked as exemplified by the Arab Spring, which was preceded by a rise in food prices,” note Hermes fund managers in a recent report.

But no crisis looks quite the same as the last. Rabobank thinks the consumer impact could be less painful this time around compared to 2008, when there were severe shortages of wheat and rice.

That is because today’s shortages are being seen more in crops used as animal feed, such as corn and soybeans.

In contrast, back in 2008 falling wheat stocks and various bans on rice exports capped the amount of grains available for direct consumption by people.

Today, prices for staple grains such as rice and wheat are currently 30pc below their 2008 peaks.

So while the pressure on feedstock supplies pushes up meat prices, consumers feeling the squeeze should be able to switch from animal protein towards staple grains.

Food prices are also rising in a very different global economic environment, with Chinese demand slowing and the debt problems of the West weighing on world growth. That lessens wider price pressures in the system.

However the risks remain, as states try to appease citizens feeling the squeeze.

As in 2008, government stockpiling, trade restrictions and other forms of intervention remain a significant threat, says Rabobank. But it warns a pick-up in government intervention will prove counterproductive at an international level, as states engage in a “vicious cycle” of protectionist policies, aggravating the food price environment.

More specifically, the scarcity of feed crops is expected to have major repercussions for the meat and dairy industries, as the increase in the costs of feed stocks raises the prices faced by consumers and hits profit margins.

In the shorter term, higher slaughter rates as producers respond to rising feed costs should temporarily increase the meat supply. But the ultimate result is expected be smaller animal herd sizes, which will reduce meat and dairy production and ramp up prices.

The British public, which consumes high levels of meat and dairy products, will definitely feel the impact of this latest bout of agflation, says Rabobank. Nick Higgins, one of the report’s authors, says UK food prices “are going to rise in the coming year significantly.”

Still, while consumers in developing countries show “elasticity” of demand as prices move, people in the UK tend not to change their consumption patterns in response to prices, he notes.

In other words, even if meat gets more expensive, they will keep buying.

The World Bureau of Metal Statistics (WBMS) published its monthly supply and demand statistics for the metal markets last week – and the copper market is firmly in deficit.

In the first seven months of the year, supply rose 2.4pc, but demand was up by 6.7pc.

Soaring grains costs are rippling through the global food chain – and the high cost of feedstock is likely to lead to a shortage of bacon.

“New data shows the European Union pig herd is declining at a significant rate, and this is a trend that is being mirrored around the world,” according to the UK’s National Pig Association (NPA). “Pig farmers have been plunged into loss by high pig-feed costs, caused by the global failure of maize and soya harvests.”

Earlier this month Genus, the FTSE 250 company that provides pigs and cows with superior genetics to farmers worldwide, warned that rising feed costs impact “a number of customers” in the year ahead.

“British supermarkets know they have to raise the price they pay Britain’s pig farmers or risk empty spaces on their shelves next year,” Richard Longthorp, NPA chairman, said. “But competition is so fierce in the high street at present, each is waiting for the other to move first.”

Farmers worldwide have responded by sending their pigs to slaughter earlier than usual to save money – and fewer pigs are expected next year should prices remain high.

However, some respite may be ahead, after the price of grains fell last week the most they have in the last three months. Soybeans fell the most in almost a year.