And for some (idiots) this is not enough …

– Paul Krugman: QE3 Should Have Been ‘More Stronger’ (Quote Of The Day)

… versus those who can clearly see what is coming:

– Ron Paul On QE3: ‘Country Should Panic Over Fed’s Decision’ – ‘We Are Creating Money Out Of Thin Air’ – ‘We’ve Lost Control!’ (Video)

“Even when unwinding its balance sheet would mean sacrificing 30% of US GDP and, let’s be honest about it, civil war.”

Yesterday, when we first presented our calculation of what the Fed’s balance sheet would look like through the end of 2013, some were confused why we assumed that the Fed would continue monetizing the long-end beyond the end of 2012. Simple: in its statement, the FOMC said that “If the outlook for the labor market does not improve substantially, the Committee will continue its purchases of agency mortgage backed securities, undertake additional asset purchases, and employ its other policy tools as appropriate until such improvement is achieved in a context of price stability.” Therefore, the only question is by what point the labor market would have improved sufficiently to satisfy the Fed with its “improvement” (all else equal, which however – and here’s looking at you inflation – will not be). Conservatively, we assumed that it would take at the lest until December 2014 for unemployment to cross the Fed’s “all clear threshold.” As it turns out we were optimistic. Bank of America’s Priya Misra has just released an analysis which is identical to ours in all other respects, except for when the latest QE version would end. BofA’s take: “We do not believe there will be “substantial” improvement in the labor market for the next 1.5-2 years and foresee the Fed buying Treasuries after the end of Operation Twist.” What does this mean for total Fed purchases? Again, simple. Add $1 trillion to the Zero Hedge total of $4TRN. In other words, Bank of America just predicted at least 2 years and change of constant monetization, which would send the Fed’s balance sheet to grand total of just over $5,000,000,000,000 as the Fed adds another $2.2 trillion MBS and Treasury notional to the current total of $2.8 trillion.

In other words, for once we actually were shockingly optimistic on the US economy. Assuming BofA is correct, and it probably is, this is how the Fed’s balance sheet will look like for the next 2 years: 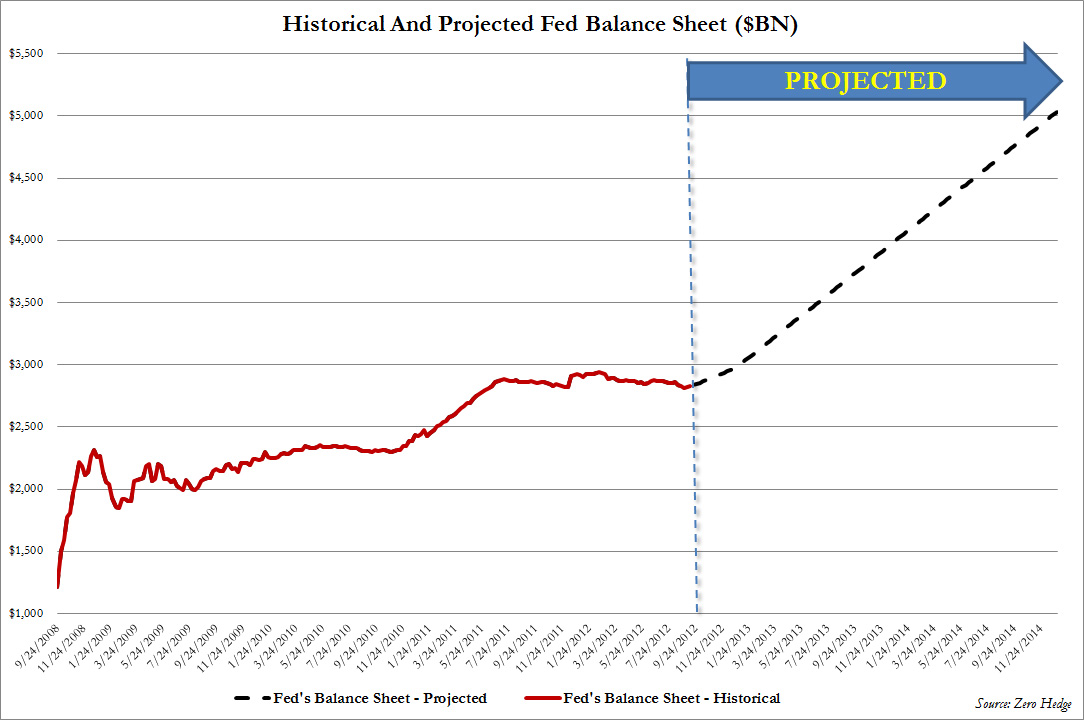 Or, in terms of US GDP, the Fed’s balance sheet will have “LBOed” just shy of 30% of all US goods and services. 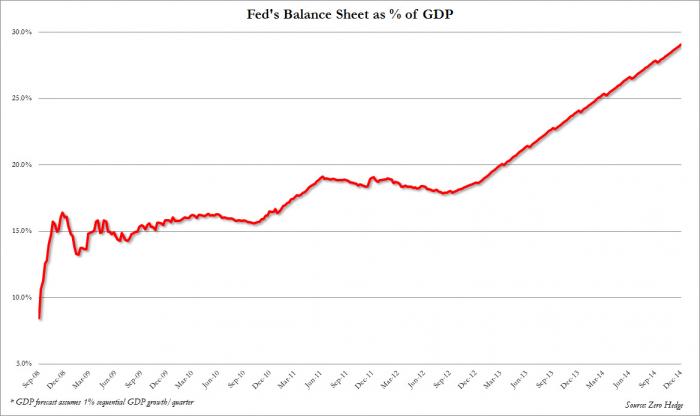 Since the Fed is effectively becoming the marginal player in both the MBS and Treasury markets, a very relevant question is how much private market debt is left to sell. Short answer: not much. According to BofA’s calculation, the Fed will own more than 33% of the entire mortgage market by 2014.

That’s half the story.

On the Treasury side, in just over 2 years, “Fed ownership across the 6y-30y portion Treasury curve is likely to reach about 50% by end of 2013 and an average of 65% by end of 2014.” You read that right: in just over 2 years, the Federal Reserve will hold two thirds of the entire bond market with a maturity over 5 years (which by then will be part of the Fed’s ZIRP commitment, yield 0% and essentially be equivalent to cash).

No wonder that David Rosenberg is worried that the Fed will soon run out of securities to buy (well, there are always equities of course, but the Fed will not monetize those until some time in 2015 when hyperinflation is raging).

And speaking of hyperinflation (and our earlier note that nothing “else is equal”) the real question is if indeed the Fed will own $5 trillion in “assets” in 27.5 months, what does that mean for gold and crude? The answer is plotted below: 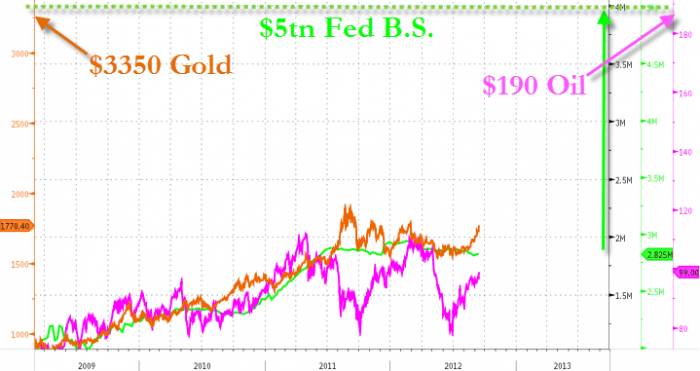 In case it is unclear, the answer is:

Luckily the Fed has already factored all these soaring input costs (and “alternative money” prices) in its models, and there is nothing to worry about. Lest we forget, the Fed can crush inflation cold in 15 minutes cold… somehow. Even when unwinding its balance sheet would mean sacrificing 30% of US GDP and, let’s be honest about it, civil war.

That’s it in a nutshell. Those who are interested in the nuances of the BofA analysis, which is a replica of our own, can read on below:

Given our growth forecast, we expect the Fed to follow up the expiration of Operation Twist with an open-ended outright Treasury purchase plan at the December meeting. We expect the pace could be between $45 billion (which would be equal to the current size of Twist) and $60 billion/month for two years [in 10 year equivalents]. We expect a long program given the slow improvement in the labor market as well as the Fed’s focus on a “substantial and sustained improvement” in the employment situation.

Table 2 compares different asset purchase programs by the Fed in terms of the net notional and duration take-out. Were the Fed to engage in renewed Treasury purchases post the end of Twist (in the same maturity distribution), this could easily become one of the largest programs in terms on monthly 10y equivalent demand from the Fed. Note that even MBS buying takes duration out of private hands, which would put downward pressure on rates

We estimate that Fed purchases will take out about 60% of monthly MBS production. However, our mortgage strategists note that historically the Fed has concentrated its buying in 30y conventionals. For example, in August the Fed bought $23bn of conventional 30s, $2.5bn of conventional 15s and $3bn of GNs. This compares with gross issuance at $122bn, which is split into $88bn in conventionals ($66bn in 30s, $22bn in 15s) and $34bn in GNs. In other words, the Fed has concentrated 80% of its purchases among conventional 30y. A similar pattern would suggest that the Fed would buy an additional $30bn in this sector, which could end up being almost 90% of all issuance in conventional 30y. This explains the significant tightening in the mortgage basis, and would argue for the Fed to buy some other sectors as well.

In terms of outstandings, we expect the Fed to end up owning more than 33% of the total market by the end of 2014, which is also significant since many mortgage investors tend to reinvest paydowns. These investors would need to be persuaded to sell MBS to the Fed, which would require tighter spreads.

Given our growth forecast, we expect the Fed to follow up the expiration of Operation Twist with an open-ended outright Treasury purchase plan at the December meeting. We estimate further what the potential ownership of the Fed could look like in the Treasury market over the course of the next two years. We assume that: 1) Purchase sizes are in the same distribution as Twist, sans the sales; 2) Treasury coupon auction sizes remain constant; and, 3) The Fed does not change the 70% per issue maximum SOMA limit.

Table 3 and Table 4 simulate the Treasury universe during the course of 2013 and 2014. Fed ownership across the 6y-30y portion Treasury curve is likely to reach about 50% by end of 2013 and an average of 65% by end of 2014. Given the current issuance schedule, we believe it is very likely that the Fed changes its purchase buckets through the next round of Treasury purchases. In particular, the Fed will begin to run out of issues in the 8y-10y bucket and will be forced to buy newly issued 10y notes should they choose to maintain the same distribution. We believe this is unlikely, and that the Fed is likely to redistribute its purchases and possibly include the 5y portion of the curve to provide some room.