End result: every month through the end of 2012, the Fed’s balance sheet expands by $40 billion in MBS.

End result: every month in 2013 the Fed will increase its balance sheet by $85 billion, consisting of $40 billion in MBS, and $45 billion in 10-30 year Treasurys, or the natural monthly supply of longer-dated issuance. The Fed will therefore monetize roughly half of the US budget deficit in 2013.

Putting it all together, the Fed’s balance sheet will increase from just over $2.8 trillion currently, to $4 trillion on December 25, 2013. A total increase of $1.17 trillion.

This is what the Fed’s balance sheet will looks like: 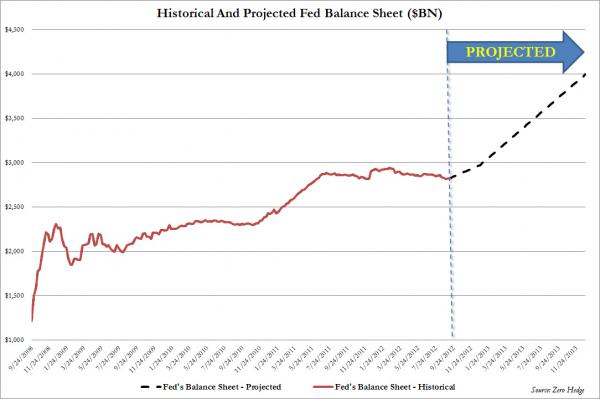 Another way of visualizing this is how many assets as a percentage of US GDP the Fed will hold on its books. Currently, this number is 18%. By the end of 2013, the Fed’s historical flow operations will be accountable for 24% of US GDP. 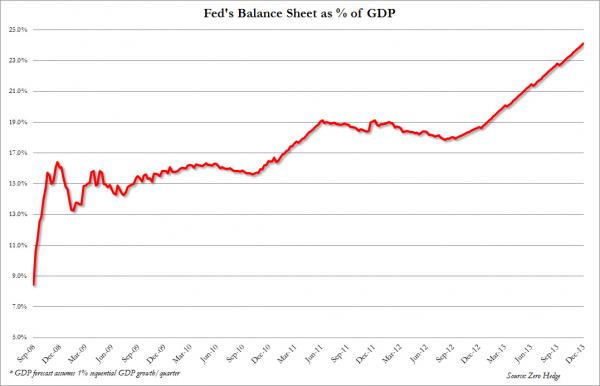 Why is this important? Simple: when the time comes for the Fed to unwind its balance sheet, if ever, the reverse Flow process will be responsible for deducting at least 24% of US GDP at the time when said tightening happens. If ever.

What is scariest, is that as of this moment, all of this is priced in. Any incremental gains in the stock market will have to come from additional easing over and above what Bernanke just announced.