Earlier we explained why Bernanke’s actions today mean that the Fed Balance Sheet will likely grow to over $4 trillion by the end of 2013. Critically this flood of liquidity will raise the nominal price of every asset (from whimsical pieces of stockholder paper to barbarous relics and black gold). Some of these assets, like stock prices and high-yield credit spreads do have point-in-time ‘value limits’ to their price – though at times it seems a dream that fundamentals would ever matter again; but some have less of a binding constraint – such as gold. Should the Fed proceed, as seems likely, and do its worst/best to blow its balance sheet wad then we estimate Gold will be priced at least $2250 per ounce by the end of 2013(of course higher if the Fed sees no evidence of recovery). Meanwhile, deeper underground, the world’s mainstay source of energy, WTI Crude oil, could jump to record highs over $150 per barrel(which just happens to coincide with the ‘pegged’ value of oil in gold). It will be interesting indeed to see how the world’s socio-economic infrastructure hangs together should that occur – can’t happen? Different this time? Indeed it is now that Ben hit the big red ‘panic’ button.Gold vs Fed and ECB balance sheets… notably for QE2, gold priced in all the Fed balance sheet expansion within around half the period (around six months from Jackson Hole) and then overshot – this would infer we see Gold $2250 around the end of the first quarter next year – and expect some overshoot… 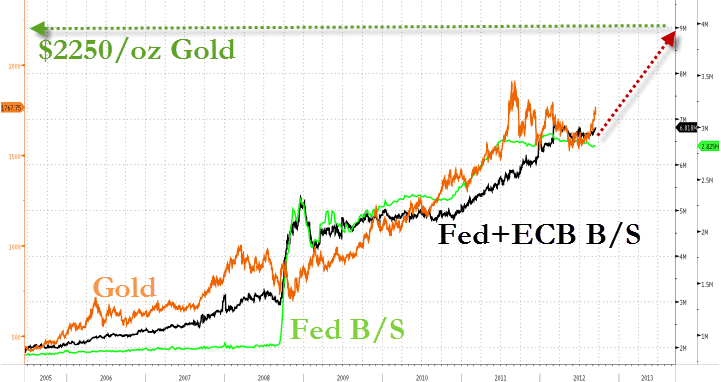 Oil vs Fed balance sheet… (which fits nicely into the 0.07 oz of Gold per barrel ‘peg’ that seems to have been ‘agreed’ with the world’s oil producers). 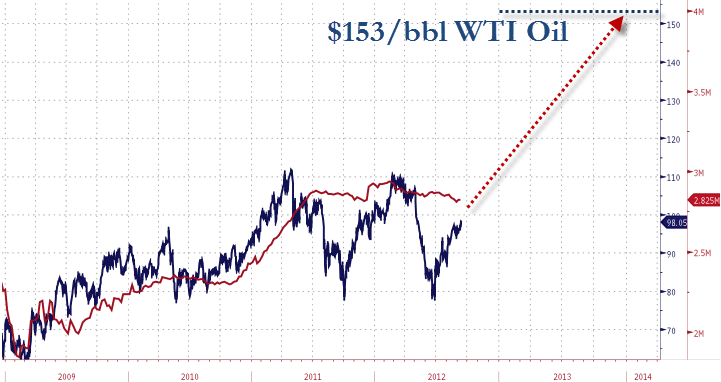