– Moody’s Warns Of 1 Notch Downgrade If A Bitterly Divided Congress Does Not Begin To Cooperate (ZeroHedge, Sep 11, 2012):

13 months ago, in the aftermath of the debt ceiling fiasco, which we now know was a last minute compromise achieved almost entirely thanks to the market plunging to 2011 lows, S&P had the guts to downgrade the US. Moody’s did not. Now, it is Moody’s turn to fire up the threat cannon with a release in which it says that should the inevitable come to pass, i.e. should congressional negotiations not “lead to specific policies that produce a stabilization and then downward trend in the ratio of federal debt to GDP over the medium term” then “Moody’s would expect to lower the rating, probably to Aa1” or a one notch cut. Moody’s also warns that should a repeat of last year’s debt ceiling fiasco occur, it will also most likely cut the US. Of course, that the US/GDP has risen by about 8% since the last August fiasco has now been apparently forgotten by both S&P and Moodys. Sadly, continued deterioration in the US credit profile is inevitable, as every single aspect of modern day lives that is “better than its was 4 years ago” has been borrowed from the future. More importantly, with the S&P at multi year highs courtesy of Bernanke using monetary policy to replace the need for fiscal policy, Congress will see no need to act, and Moody’s warning will be completely ignored. This will continue until it no longer can.From Moody’s:

Budget negotiations during the 2013 Congressional legislative session will likely determine the direction of the US government’s Aaa rating and negative outlook, says Moody’s Investors Service in the report “Update of the Outlook for the US Government Debt Rating.”

If those negotiations lead to specific policies that produce a stabilization and then downward trend in the ratio of federal debt to GDP over the medium term, the rating will likely be affirmed and the outlook returned to stable, says Moody’s.

If those negotiations fail to produce such policies, however, Moody’s would expect to lower the rating, probably to Aa1.

Moody’s views the maintenance of the Aaa with a negative outlook into 2014 as unlikely. The only scenario that would likely lead to its temporary maintenance would be if the method adopted to achieve debt stabilization involved a large, immediate fiscal shock—such as would occur if the so-called “fiscal cliff” actually materialized—which could lead to instability. Moody’s would then need evidence that the economy could rebound from the shock before it would consider returning to a stable outlook.

Moody’s notes that it is difficult to predict when during 2013 Congress will conclude negotiations that result in a budget package. The Aaa rating, with its negative outlook, is likely to be maintained until the outcome of those negotiations becomes clear.

The rating outlook also assumes a relatively orderly process for the increase in the statutory debt limit, says Moody’s. The debt limit will likely be reached around the end of this year, and the government’s ability to meet interest and other expenses out of available resources would likely be exhausted within a few months after the limit is reached.

Under these circumstances, the government’s rating would likely be placed under review after the debt limit is reached but several weeks before the exhaustion of the Treasury’s resources. Moody’s took a similar action during the summer of 2011.

And this is where we stand: Moody’s has basically said that unless the red line stop going from the lower left to the upper right it may, just may, do something: 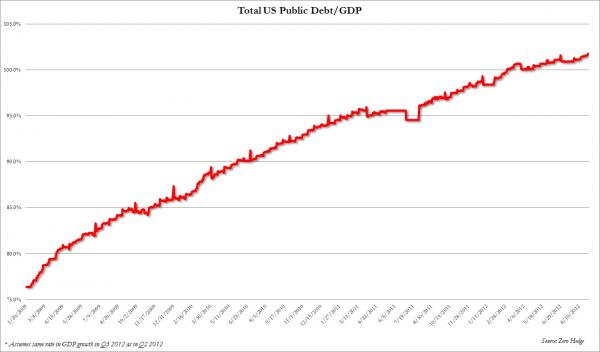