Some look at today’s FaceBook IPO flop, the ongoing market rout, and the situation in Europe with disenchantment and disappointment. We, on the other hand, view it with hope: because more than anything, the events of the past few days show that the truth is getting out – the truth that capital markets simply can not exist under the authoritarian rule of central planners, the truth that the stock market is a casino in which the best one can hope for a quick flip, and finally the truth that our entire socio-economic regime, whose existence has been predicated by borrowing from the uncreated wealth of the future, and where accumulated debt could be wiped out at the flip of a switch if things go wrong in the process obliterating the welfare of billions (of less than 1%ers), is one big lie.

We believe that hope is what SocGen’s Dylan Grice is what he has in mind when he penned the following conclusion to his most recent piece: La Grande Illusion.

Since the crisis broke in 2008, the Fed and BoE have printed enough money to buy over 60% of the issuance of their respective government securities since. It makes you wonder. What would bond yields in the US and the UK look like without these purchases? Probably like those in the eurozone periphery. Indeed, maybe the euro debacle could have been completely avoided if the ECB had been headed up by a Ben von Bernanke, or a Mervyn Le Roi. Maybe that’s why so many of my friends agree with Atlantic magazine, which praised Ben Bernanke for ‘masterfully navigating’ the financial crisis and avoiding another depression.

Maybe all the Anglo-Saxon central banks have done is create the illusion that our sovereigns are more solvent than they are, and that our budget constraints are really a safe distance away.

But I don’t think they are. And I think the truth gets out eventually. The Enrons, the Allied Capitals, the Bernie Madoffs … they all get their comeuppance. Indeed, it’s what’s happening today in the eurozone. The accounting shenanigans eurozone governments resorted to in order to meet the entry criteria have been found out. Or at least, current CDS prices correlate well with countries’ cumulative deficit manipulations in the run-up to monetary union, as estimated by Paul van den Noord and Vincent Koen at the OECD. You can’t escape your budget constraint with financial gimmickry. You can just make it look like you have for a while. 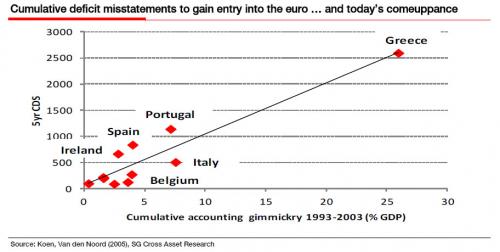 Because if there is at least one thing the central planners of the status quo do not have control over, it is just that: hope.