The greatest financial collapse in world history is coming.

The biggest story of the late 20th century was the collapse of the Soviet Union. After decades of a government controlled, centrally planned economy and outsized military expenditures the Soviet Union just one day ceased to be. Fast forward a few decades and now the biggest story about to happen in the early 21st century will be the collapse of the US empire for the exact same reasons.

The US economy has been centrally planned and manipulated by the communist fashioned central bank, the Federal Reserve, for 99 years now. But it wasn’t until August 15, 1971 that the last linkage of gold from the US dollar was removed and the US Government and the Federal Reserve were allowed to truly run rampant with their anti-capitalist economic system.

A look at US Government debt since the beginning of the 20th century tells the story: 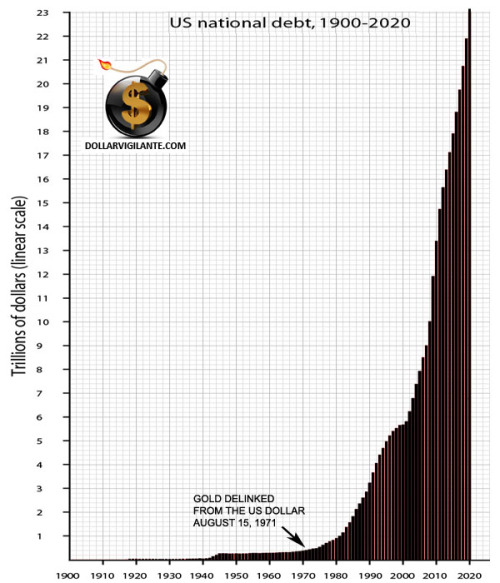 Just like the Soviet Union the US has also bankrupted itself on offense. Sorry, they call it defense even though all they do is attack and occupy other countries. The US spends more than the rest of the world combined on its military and spends $2,374 per capita each year. The next nine closest countries in military spending per capita average $80 per annum.

Yet millions of US citizens will rise to their feet and cheer as military jets streak overhead literally burning their money in front of their eyes. “USA! USA! USA… is bankrupt”.

And, just like the Soviet Union, the US is destined to collapse. It is not an if… it’s only a when.

The collapse of the US sounds very dramatic to many people. That’s because the US has been the most dominant nation on Earth for the last century. It used to be the beacon of freedom and it attracted most of the world’s top talent and became the place to be for almost any endeavor. It was also a leader in free market economics until just a few decades ago.

But, that was then, this is now. Now, after a focused effort to indoctrinate US citizens in public schools and using the media to trick them into believing that socialism is the kindest and best form of government the results can be seen everywhere. Occupy Wall Street kids play bongos and rail against the evils of capitalism – something they have never actually seen in their lifetimes.

Meanwhile, all around the world, billions are waking up to the beauty and empowerment of capitalism. A billion people in China who are almost all of a free-market bent but who were forced down the disastrous communist road for a few decades are building a new future. In the old Soviet Union almost everyone is pro-capitalism after going through the horror of communism in the Soviet Union. Chinese people now rent helicopters to fly over properties in Canada for purchase while Russians are well known the world over for being some of the richest anywhere. In Mexico, tourism was at a record last year despite the US propaganda as Russians streamed into the freest country in North America. And dozens and dozens of other countries in Asia, Latin America and the former Soviet bloc are all on the capitalism bandwagon.

In fact, the only two significant places in the world where capitalism seems to be distinctively out of favor are the US and Western Europe.

Doug Casey is well known for having said, “Europe will mainly serve as a source of houseboys and maids for the Chinese”. And, the way the US is going, many US citizens will likely serve much the same role. A lot of the hackey sack playing drum circle Occupy Wall Street denizens will soon be drafted into the military to pay off their tens or hundreds of thousands worth of student debt and will become cannon fodder in the US Government’s next criminal war… perhaps Iran. And those who avoid that fate will likely end up waiting tables or driving taxis in Latin America or Asia as well, muttering their Marxist propaganda under their breath as they facilitate the transit of their much more productive employers.

Some believe that the collapse of the US will be the collapse of “freedom”. But if that’s the case then that war has already been lost. While there are still a few tens of millions of US citizens who have some concept of what freedom is and what free-market capitalism is, there are billions worldwide that also now know this. Freedom and capitalism will not die with the US empire. In fact, as the War on Drugs, the Federal Reserve and the TSA all die with the US empire it will become clearer to everyone that the US Government had become the biggest enemy to freedom and capitalism on Earth and will likely set off an incredible period of liberty and prosperity…once the dust settles.

The key will be to retain your assets during the collapse and that will be the trickiest part. Owning precious metals and getting a significant percentage of your assets outside of the US should be priority number one for US citizens at this time… the same way as it was for USSR citizens twenty years ago. We are releasing a Special Report entitled “Getting Your Gold Out Of Dodge” in the next 24 hours which will go in depth into detail on how to accomplish that. As well, getting a second passport has never been more important for anyone since the Jews in Germany in the late 1930s as it is for Americans today whose government is closing every door to allowing US citizens to open foreign bank and brokerage accounts. Again, TDV is focused on providing options for Western citizens who are fast becoming the new Jews. We offer a number of options for acquiring a foreign passport as cheaply and as quickly as possible at TDVPassports.com.

While we personally have no interest in living in the US for the next few years as the collapse happens we do think there will be once-in-a-generation opportunities there once the dust settles. The key will be keeping your assets safe and secure until then… something that every government and central bank in the world is making increasingly difficult with each passing day.

W.G. Hill of the Invisible Investor stated, “Get your money out of the country, before your country gets the money out of you”. The details of how to do that are not taught by any government registered financial advisor but thanks to the internet you have the ability to do your own research and get access to the independent sources of information that are unattached to the current fascist corporatist system to help guide you. Take advantage of it while you can because governments have realized this and are coming after the internet next.