War with Russia and China, anyone?

Britain, America and France delivered a pointed signal to Iran, sending six warships led by a 100,000 ton aircraft carrier through the highly sensitive waters of the Strait of Hormuz. 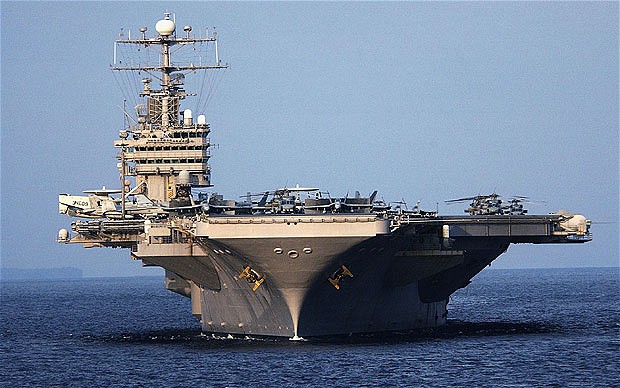 Last month, Admiral Habibollah Sayyari, commander of the Iranian navy, claimed that closing the Strait would be “easy,” adding: “As Iranians say, it will be easier than drinking a glass of water.”

But USS Abraham Lincoln, a nuclear-powered carrier capable of embarking 90 aircraft, passed through this channel and entered the Gulf without incident yesterday. HMS Argyll, a Type 23 frigate from the Royal Navy, was one of the escort vessels making up the carrier battle-group. A guided missile cruiser and two destroyers from the US Navy completed the flotilla, along with one warship from the French navy.

All three countries retain a permanent military presence in the Gulf, but a joint passage through the Strait of Hormuz by all of their respective navies is highly unusual. The flotilla will have passed within a few miles of the Iranian coastline.

A western official denied this was a provocative move intended to increase the pressure on Iran. The goal was simply to “illustrate international resolve” to guarantee free movement of shipping through a vital artery of the world economy, he said.

A Ministry of Defence spokesman confirmed that “HMS Argyll and a French vessel joined a US carrier group transiting through the Strait of Hormuz to underline the unwavering international commitment to maintaining rights of passage under international law.”

The spokesman added that Britain maintains a “constant presence in the region as part of our enduring contribution to Gulf security”. Royal Navy warships have been patrolling the region continuously since 1980.

Abraham Lincoln’s entry into the Gulf came in defiance of an explicit warning from Iran. Earlier this month, General Ataollah Salehi, commander of the country’s armed forces, threatened to respond with “full force” if any US carrier ventured into the region’s waters. “We don’t have the intention of repeating our warning, and we warn only once,” he said.

The Islamic Republic then held a naval exercise in the Strait of Hormuz. More Iranian military manoeuvres, code-named Exercise Noble Prophet, are expected in the waterway later this week.

Another carrier, USS Carl Vinson, has been in the Gulf and the surrounding region for several months. Abraham Lincoln’s arrival means a return to the two-carrier deployment that America has retained in the area for many years.

Each of these Nimitz class vessels carries a complement of fighter aircraft with more striking power than the entire Iranian air force. Their presence widens the options open to Western governments should Tehran attempt to retaliate for tighter sanctions by harassing international shipping lanes.

Iran could do so by laying launching attacks using warships or land-based anti-shipping missiles. Each of these threats could be countered using carrier-based aircraft.

However, officials believe that the balance of forces against Iran makes any such move against the Strait of Hormuz highly unlikely. Iran has an interest in talking up the possibility because this can raise oil prices and increase its own revenue at a time when its economy is in severe difficulties.

One official added that no government should dismiss these threats, pointing to Iran’s actual disruption of shipping in the Gulf in the late 1980s. Another option that would fall short of launching classic military strikes would be for Iran to lay mines in shipping lanes.

All US warships deployed in the Gulf, the Red Sea and the western half of the Indian Ocean are controlled by US Fifth Fleet headquarters in Bahrain. The Royal Navy also has a small permanent staff based in the Gulf kingdom.

– IAEA ‘Officially Confirmed That Iran Has Started Enriching Uranium To The 20-Percent Level, Which Can EASILY Be Turned Into Fissile Warhead Material’