I am aware of Ron Paul’s handshakes and symbols. To my knowledge there are fights inside Freemasonry happening right now.

So many Freemasons, reaching the highest level(s), have found out  who the ‘GOD’ of Freemasonry really is and this greatly disturbs them to say the least.

And only when they have reached the highest levels and have been selected will they get in contact with the elitists, the Illuminati.

Ron Paul is still the only political chance we have right now to save America and prevent WW III from happening.

Look at his voting record, look at what he promised and at his actions!

ALL the others are pathetic liars, hypocrites and elite puppets of the worst kind.

The only other option is a REVOLUTION and since TPTB will not back down without a fight, this would end in a full-scale, all-out civil war.

We are dealing with the same criminal elitist families that brought Hitler to power.

I personally do not belong to any organization. I was never a Freemason and will never be one, nor did I ever belong to any secret society.

(And I ‘regret’ to have the number 23 in my email, which potentially keeps donations of knowledgeable readers away. :-))

Again, Ron Paul is our ONLY POLITICAL CHANCE to stop the warmongers and constitution destroyers right now. 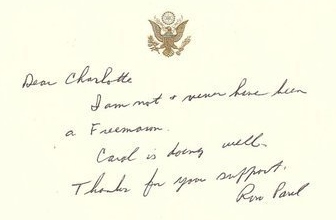 Lying about the secret?
“The Secret Lies with Charlotte” was the key to
the Masonic secrets in National Treasure

In this handwritten letter (note the reverse of the Great Seal) to a “Charlotte” published on his site Paul denies being a “Freemason.” And here’s where we come to the classic non-denial denial. A “Free” Mason is a member of the Ancient, Free and Accepted Masonic Order. There are other Orders that do not define themselves as “Free.” Several, actually.

And as longtime Secret Sun readers know, the Free-masons are the low men on a much bigger Masonic totem pole in which Masonic-inspired and Masonic-created fraternities and secret societies wield the true power. And here’s where we hit paydirt… 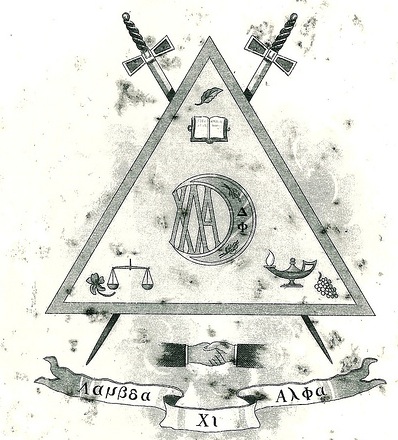 Do you see the hidden Eye in the Triangle?

Paul is a proud member in good standing of Lambda Chi Alpha, yet another Masonically-created fraternity that is classified as a “secret” fraternity. Lambda Chi traces its origins to Boston (birthplace of American Freemasonry) and Phila(e)delphia, in Paul’s native Pennsylvania. Here’s an obituary of Lambda Chi’s founding father, John E. “Jack” Mason (seriously).

Funeral services were held on Wednesday, June 5, at the Oliver H. Bair funeral parlors in Philadelphia. Cremation and private burial were in Woodland Cemetery. Masonic services were conducted by Lodge 51, of which he was a past master, the preceding evening with his close friend and associate, past Grand High Alpha Fischer, in his station of senior warden.
That Lambda Chi is in fact a Masonic fraternity and not just a drinking club is made clear by its original seal, prominently featuring a Masonic handshake. Lambda Chi also includes an inner body called “The Mason’s Circle,” a classic example of esoteric double-entendre. 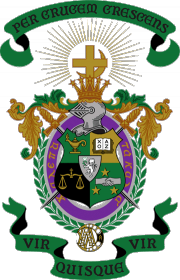 It’s current seal also features the handshake, which is overshadowed now by explicit Knights Templar (and Solar) iconography, as well as the cojoining of the cross and the crescent, which is a byword for the Order.

• Is Ron Paul a Free-mason? Probably not.

• Is he a member of at least one Masonic fraternity? Without question.

• How seriously does he take the Masonic craft itself? Oh, you have no idea…

Paul’s Presidential announcement should tickle the fancy of Masonic ritual watchers, for both obvious and more obscure reasons. 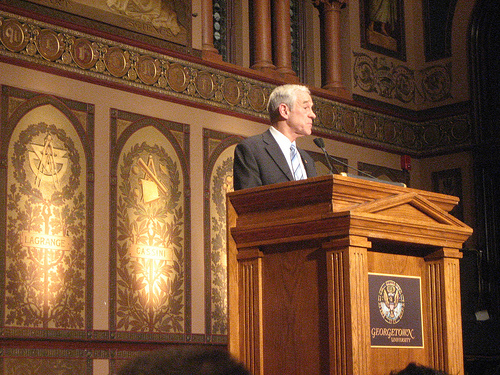 Ron Paul speaking at Georgetown Jesuit University (Gaston Hall), alma mater of Carroll Quigley and Bill Clinton. Note the Freemasonic symbols on the wall behind him.

I know this is a taboo subject among Ron Paul supporters, of which I was one myself in the very beginning of his presidential campaign. And even if it is proven beyond any doubt that he is a freemason, many will just put it aside and pretend it doesn’t matter “because he is such a decent and honest man” etc. But many others are very curious to know what RP’s status is regarding Freemasonry because it does matter, and I fully intend to find out myself. Therefore, it is high time we started talking openly about it and try to ascertain the truth, one way or another.

I just happened to stumble across this comment over at the Daily Paul yesterday, and thought that I should share it with whoever is interested in knowing whether or not Ron Paul is a Freemason.

This does not prove anything in that regard, however it makes the probability that he is a Freemason very much higher since Eastern Star members are generally married to Freemason husbands, Rainbow girls are generally children of masons and because Ron Paul’s father was also a mason. And in addition, according to the comment, he “respects the organization”, which is wholly uncharacteristic of anyone who is supposedly fighting against the masonically-inspired New World Order. Ron Paul is also an unofficial member of the John Birch Society, which was founded by masons, funded by Nelson Rockefeller and run by Jesuit-trained Knights of Malta. In other words, the JBS is a gatekeeper organization, designed to control the opposition and make sure nothing substantial is ever done to impede the New World Order system which just keeps on rolling over humanity. How about the Jahbulon Bullshit Society for a more appropriate name?

Here is the comment in full rebutting an anti-masonic posting:

Quit using Ron Paul as a forum for your bigotted beliefs. You don’t know anything about him or his ideals obviously. You also know nothing about the Freemason or Eastern Star organizations.

1. Ron Paul’s father was a Freemason and Dr. Paul has said himself many times that he respects the organization and has been to many of the open meetings in his district. I should know, I was his scheduler for ten years.

2. His wife, Carol is a member of the Velasco Order of the Eastern Star and maintains her membership in the Freeport area lodge.

3. Their daughters, Lori and Joy, were both Rainbow girls, another organization associated with Freemasonry.

Your hatefilled retoric regarding a benevolent, Biblically based organization is likened to those who have a fear of the unknown. It spawns lies and hate toward those who are innocent and have done good for others. Just try taking your child to the Shriner’s burn or crippled childrens hospital. They will take care of your child regardless of your ignorance and will do it free of charge. How many people has your paranoia helped?

Unfortunately, the link now says “access denied” for whatever reason. Maybe you can explain to me why the link no longer works. I even tried to find the page again through a Google search (how I found it originally) and nothing. Poof! Gone. No trace. Not even a Google cache available. I wonder why? Hmmm….

If anyone knows the actual identity of this “scheduler” with the handle of “Liberty Oak Ranch”, please share it here with us to help confirm the validity of the comment.

I looked up the Eastern Star chapter being referred to if anyone wants to try and research this further: 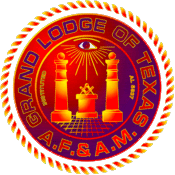 Then, one might assume that Ron Paul frequently goes (as the scheduler claims) to meetings at a masonic lodge in the same area, so I found this lodge listed with the Grand Lodge of Texas website which it would seem is a very likely candidate for being one of those lodges he attends:

11 thoughts on “Ron Paul And Freemasonry: Ritual And The Scottish Rite”