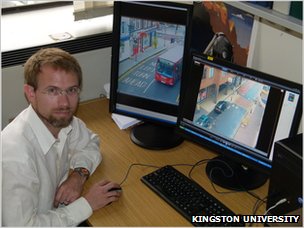 However, the developers insisted that their invention would allow police to focus on law breakers and erase images of innocent civilians.

The technology works by teaching a computer to recognise specific types of public behaviour, known as “trigger events”.

“In riot situations, it could be people running – a crowd might converge in a certain place,” said Dr James Orwell of Kingston University

“If somebody pulls out a gun, people tend to run in all sorts of directions. These movements can be detected.”

When an event is triggered, the software collates video footage from before and after the incident to record a full history of the suspect’s movements.

“If a window was smashed and shop looted in a town centre street, the technology would trace back to see who smashed the window and then retrace his steps to see when and where he entered the town centre.

“The technology would also trace where the man had gone after leaving the scene,” said Dr Orwell.

The study is part of the ADDPRIV project – a European collaboration to build a surveillance solution that acknowledges wider privacy concerns.

A key element of the system is the automatic deletion of surplus video data.

“There is a mainland European resistance to CCTV – tight controls on how long you can keep data,” explained Dr Orwell.

“This project addresses it by saying ‘This is the event – let’s wrap up everything that’s relevant, then delete everything else.’

“We’re seeking to use surveillance to help control society, while avoiding the Big Brother nightmare of everybody being seen all the time,” he added.

Charles Farrier from anti-surveillance campaign group No CCTV believes that excessive security powers would leave the system open to abuse.

“If you’ve got a state-run camera system and the state wants it triggered on, say, peace activists, then they won’t be bound by the same rules as everyone else.”

1 thought on “‘Smart’ CCTV Could Track Rioters (BBC News) – Guess Who Developed The Technology? Dr. James ORWELL And His Team At Kingston University”