– Former Japanese Government Nuclear Advisor Toshiso Kosako: ‘Come The Harvest Season In The Fall, There Will Be A Chaos’ – Ceiling On Schoolyard Radiation Levels ‘Unacceptable’ – Much More Radiation Threats To Come

70 years after rice futures trading was halted on the Tokyo Grain Exchange, it was finally reopened today… only to be halted immediately. The reason: concerns that Fukushima radiation would destroy rice crops and collapse supply sent the contract price soaring from the reference price of Y13,500 to a ridiculous Y18,500 at which point it was halted. Note the tick chart below which puts any of our own stupid vacuum tube-induced HFT algos to outright shame. That said, the move should not come as a surprise at least to our readers after we predicted the day Fukushima blew up (and even before) that very soon rice prices would surge to record highs. Little by little, that realization is dawning on everyone. 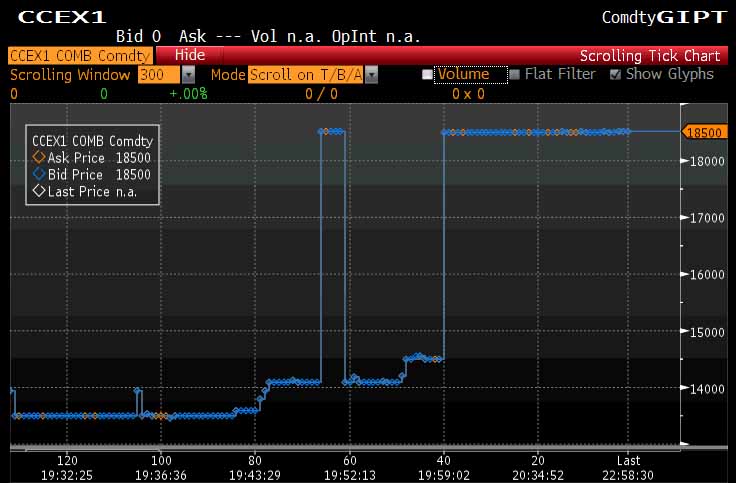 The exchange listed rice contracts today for the first time since the start of World War II to boost flagging volumes and profit. The resumption comes as fallout from the Fukushima Dai- Ichi power plant may spread after it was found cattle had been fed cesium-tainted rice straw.

“People are very concerned that rice supplies may be smaller on fear of radiation contamination,” Nobuyuki Chino, chairman of the exchange’s rice futures trading committee, told reporters in Tokyo. “This was reflected in the prices,” said Chino, who is also president of Tokyo-based grain company Continental Rice Corp.

Commercial stockpiles of rice, a Japanese staple, may drop to the lowest level in four years in 2012, after the March earthquake and nuclear disaster curbed production, possibly spurring the government to release its reserves, according to the agriculture ministry.

Faced with criticism from consumer groups and opposition party politicians that lax government control has endangered food safety, the ministry has tightened rice screening before the harvest begins in eastern Japan.

The government ordered Fukushima and 13 nearby prefectures to test rice samples before the harvest. Authorities will ban shipments from areas where they find grains containing cesium exceeding 500 becquerels a kilogram. Rice production in Fukushima and neighboring Ibaraki, Miyagi and Iwate prefectures amounted to 1.56 million metric tons last year, out of the country’s total of 8.5 million tons.

Sadly, this development means that Thailand and Vietnam, and the rast of the major rice exporters, are suddenly going to find they have quite a bit in marginal pricing power for this core Japanese staple. It also means that food riots may be imminent if indeed, as futures indicate, the price of rice is about to jump by 40%.