While the CDS market for various insolvent European names whose credit default swaps are trading 10 or more points upfront has become more or less nothing but noise, and the only true way to hedge risk exposure, courtesy of ISDA’s advance warning that no matter what a CDS will never be triggered, is to sell cash bonds, the market for default risk is quite active for those names which still trade in a reasonable range: such as between 50 bps and 200 bps. And while the Bloomberg chart below demonstrates on an absolute basis the US is due for a two notch downgrade by S&P based on the recently observed spike in US default risk, it is DTCC data that is more troubling.

As the first chart below shows, of the Top 25 CDS outstanding net notional names tracked by DTCC, there is one name that is a big outlier on both a month over month and year over year basis: the United States of America. The first thing to note is that in the past week, US net notional CDS outstanding just hit $4.8 billion, an increase from $4.5 billion in the past month, a 5.4% increase (the biggest over all top 25 names), pushing the net risk on the US above that of Greece for the first time (Greece declined from $5 billion to $4.6 billion). More disturbing is that on a percentage basis, the year over year change in US net CDS outstanding is the biggest of all, more than doubling at 108.6%, followed only by China and Japan, at 96.7% and 80.9% respectively. Yes: the CDS itself has not blown out yet, but the stealthy increase in the net notional in the troika of “most stable countries” means that the smart money is already quietly positioning itself for the biggest and most significant blow out ever. It also means that the spreads of such countries of Greece and Portugal (a major drop in net notional M/M and Y/Y) not to mention Italy, are yesterday’s news. As most revel in the latest nonsensical Group of 6 plan, the bond vigilantes are already quietly setting the trap.

Below is the biggest percentage change in net CDS notional on a monthly and annual basis: 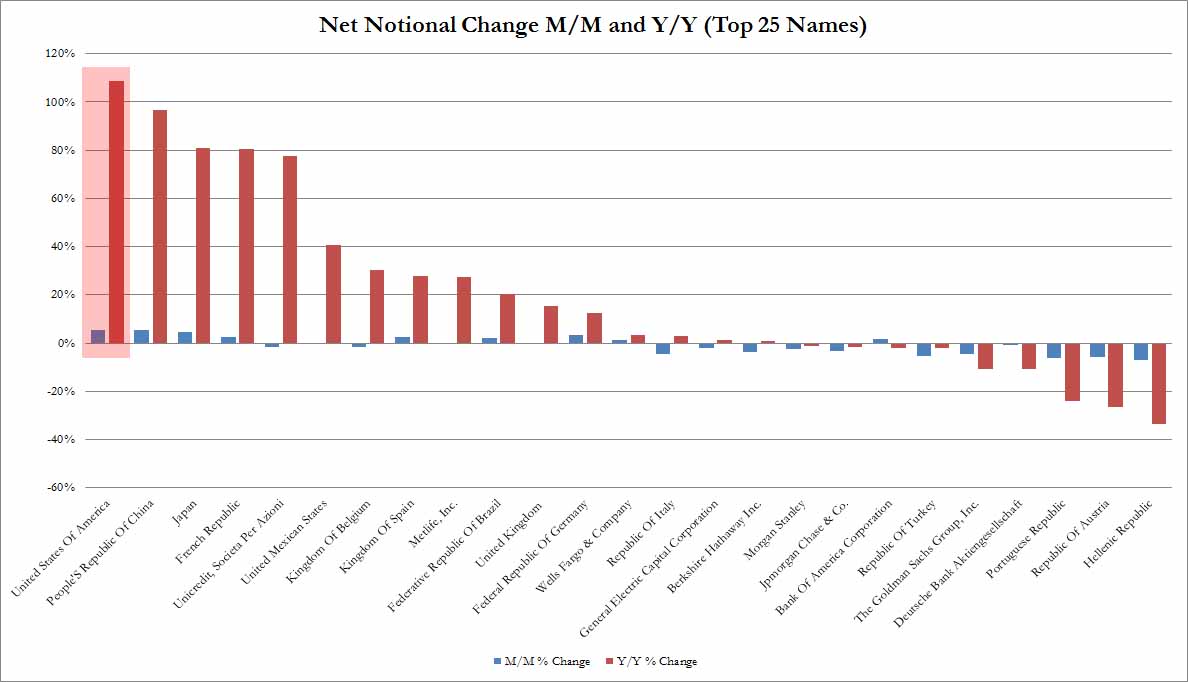 And here is Bloomberg’s take on where the US rating should be based on its CDS spread:

A Bloomberg Brief CDS implied credit rating model, which compares composite credit ratings against the cost of CDS, shows that investors may be expecting a downgrade to as low as ‘AA’ for the U.S. The world’s largest economy has already been placed on credit watch by both Moody’s and S&P. The cost of protecting against a U.S. default rose to 54.4 basis points yesterday from less than 40 in April.

The composite credit rating — on the y-axis — is calculated by quantifying the three primary ratings agencies’ (S&P, Moody’s, and Fitch) ratings, where available, and averaging the results. A score of one indicates the highest rating ‘AAA’; a score of 10 or better indicates that a country is investment-grade. The cost of fiveyear CDS — on the x-axis — is the amount traders are willing to pay to protect against a debt default. 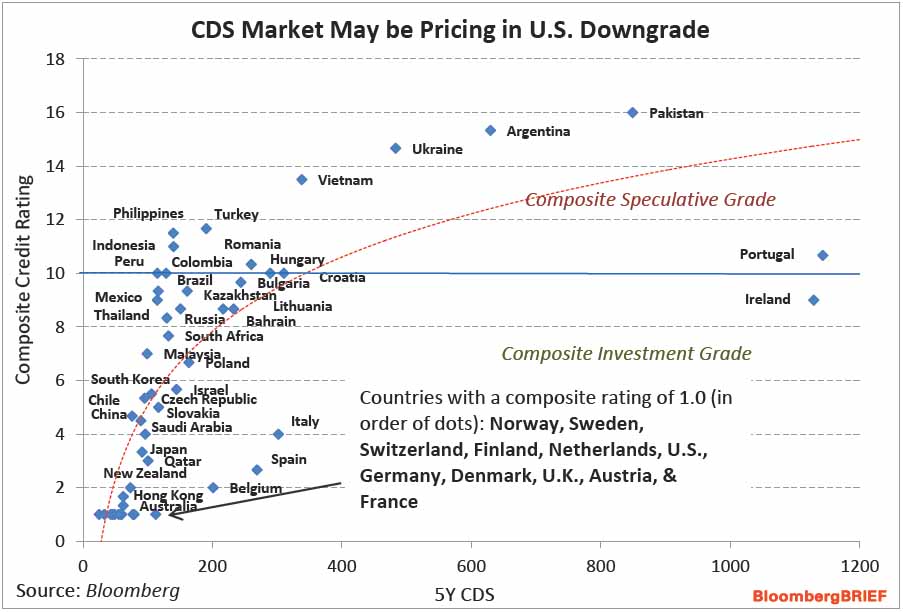 The current implied credit rating for the U.S. is 2.7, compared to 2.2 back in March, equivalent to approximate ly ‘AA’ on S&P’s scale. That is two levels below the U.S.’s current rating. March was the last time Bloomberg Brief looked at these implied credit ratings. At that time, the three most likely candidates to be downgraded were Portugal, Belgium and Spain.

Both Portugal and Spain have been downgraded. Spain is also the most likely candidate for a downgrade at present, with a composite rating of 2.7 versus a CDS implied rating of 9.1, equivalent to ‘BBB’ on S&P’s rating scale.