The USS Titanic is Sinking.

The Treasury bubble will burst and the dollar will be destroyed. I have warned many times of the coming hyperinflationary Depression. 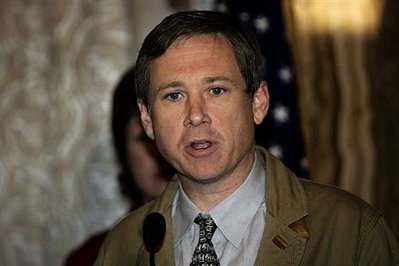 Republican US Senator Mark Kirk from Illinois speaks during a press conference in Baghdad in 2006. China, wary of the troubled US economy, has already “canceled America’s credit card” by cutting down purchases of debt, Kirk said Thursday.

WASHINGTON (AFP) – China, wary of the troubled US economy, has already “canceled America’s credit card” by cutting down purchases of debt, a US congressman said Thursday.

China has the world’s largest foreign reserves, believed to be mostly in dollars, along with around 800 billion dollars in US Treasury bonds, more than any other country.

But Treasury Department data shows that investors in China have sharply curtailed their purchases of bonds in January and February.

Representative Mark Kirk, a member of the House Appropriations Committee and co-chair of a group of lawmakers promoting relations with Beijing, said China had “very legitimate” concerns about its investments.

“It would appear, quietly and with deference and politeness, that China has canceled America’s credit card,” Kirk told the Committee of 100, a Chinese-American group.

“I’m not sure too many people on Capitol Hill realize that this is now happening,” he said.

The Republican lawmaker said that China was justified in concerns about returns from finance giants Fannie Mae and Freddie Mac, which were bailed out by the US government due to the financial crisis.

Kirk said he was the first member of Congress to tour the Bureau of Public Debt, which trades bonds, and was alarmed at how much debt was being bought by the US Federal Reserve due to absence of foreign investors.

“There will come a time where the lack of Chinese participation may have a significant impact,” Kirk said.

“We should track that, because up until last month they were the number one provider of currency to the United States and now they’re gone.”

With China’s economy also hit by the global economic crisis, Premier Wen Jiabao has openly voiced concern about the status of his country’s investments in the United States.

China has also floated replacing the dollar as the key international currency with a basket of units bringing in the euro, sterling and yen.