Six to seven years in prison at Guantanamo being innocent! 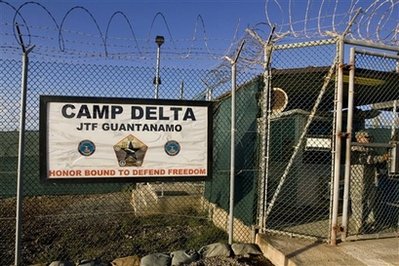 Camp Delta detention compound, which has housed foreign prisoners since 2002, at Guantanamo Bay U.S. Naval Base in Cuba. (AP)

SAN JUAN, Puerto Rico – Many detainees locked up at Guantanamo were innocent men swept up by U.S. forces unable to distinguish enemies from noncombatants, a former Bush administration official said Thursday. “There are still innocent people there,” Lawrence B. Wilkerson, a Republican who was chief of staff to then-Secretary of State Colin Powell, told The Associated Press. “Some have been there six or seven years.”

Wilkerson, who first made the assertions in an Internet posting on Tuesday, told the AP he learned from briefings and by communicating with military commanders that the U.S. soon realized many Guantanamo detainees were innocent but nevertheless held them in hopes they could provide information for a “mosaic” of intelligence.

“It did not matter if a detainee were innocent. Indeed, because he lived in Afghanistan and was captured on or near the battle area, he must know something of importance,” Wilkerson wrote in the blog. He said intelligence analysts hoped to gather “sufficient information about a village, a region, or a group of individuals, that dots could be connected and terrorists or their plots could be identified.”

Wilkerson, a retired Army colonel, said vetting on the battlefield during the early stages of U.S. military operations in Afghanistan was incompetent with no meaningful attempt to discriminate “who we were transporting to Cuba for detention and interrogation.”

Navy Cmdr. Jeffrey Gordon, a Pentagon spokesman, declined to comment on Wilkerson’s specific allegations but noted that the military has consistently said that dealing with foreign fighters from a wide variety of countries in a wartime setting was a complex process. The military has insisted that those held at Guantanamo were enemy combatants and posed a threat to the United States.

In his posting for The Washington Note blog, Wilkerson wrote that “U.S. leadership became aware of this lack of proper vetting very early on and, thus, of the reality that many of the detainees were innocent of any substantial wrongdoing, had little intelligence value, and should be immediately released.”

Former Defense Secretary Donald Rumsfeld and Vice President Dick Cheney fought efforts to address the situation, Wilkerson said, because “to have admitted this reality would have been a black mark on their leadership.”

Wilkerson told the AP in a telephone interview that many detainees “clearly had no connection to al-Qaida and the Taliban and were in the wrong place at the wrong time. Pakistanis turned many over for $5,000 a head.”

Some 800 men have been held at Guantanamo since the prison opened in January 2002, and 240 remain. Wilkerson said two dozen are terrorists, including confessed Sept. 11 plotter Khalid Sheikh Mohammed, who was transferred to Guantanamo from CIA custody in September 2006.

“We need to put those people in a high-security prison like the one in Colorado, forget them and throw away the key,” Wilkerson said. “We can’t try them because we tortured them and didn’t keep an evidence trail.”

But the rest of the detainees need to be released, he said.

Wilkerson, who flew combat missions as a helicopter pilot in Vietnam and left the government in January 2005, said he did not speak out while in government because some of the information was classified. He said he feels compelled to do so now because Cheney has claimed in recent press interviews that President Barack Obama is making the U.S. less safe by reversing Bush administration policies toward terror suspects, including ordering Guantanamo closed.

The administration is now evaluating what to do with the prisoners who remain at the U.S. military base in Cuba.

“I’m very concerned about the kinds of things Cheney is saying to make it seem Obama is a danger to this republic,” Wilkerson said. “To have a former vice president fearmongering like this is really, really dangerous.”