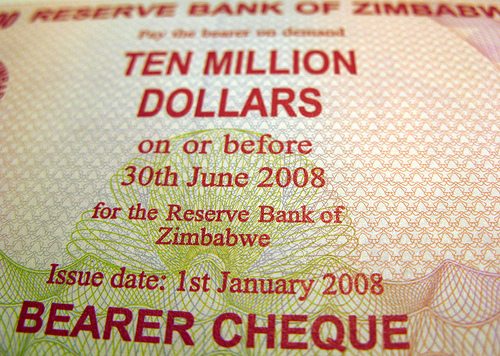 The Bank of England voted today to begin quantitative easing –  printing money to you and me – in a last ditch attempt to save the UK from the twin threats of depression and deflation.

It is a decision that is fraught with risks.

The hope is that the money pumped into the economy will encourage banks to become more relaxed about lending to individuals and businesses.

Flush with extra cash we will all rush out to spend it, kickstarting the economy and dragging it out of recession. Governor of the Bank of England, Mervyn King, will get a well deserved knighthood, and the rest of us will all breathe a sigh of relief and carry on as before, a little poorer, a little wiser, but generally OK.

But, none of the above is certain.

Banks might prefer to sit on the cash resulting in continued gridlock in the borrowing market. Impact: a big fat zero.

If too much money is pumped into the economy inflation or even hyper-inflation becomes a real threat. Impact: an unwelcome return to the 1970s.

Have you got high hopes that it will work, or are you worried that it could dig us deeper into depression? Post your comments below.

In the meantime take heed of three examples from history – and one from current times-  where printing money to get the economy out of a pickle has failed, sometimes spectacularly.

Following the the First World War, Germany, was forced to pay massive amounts of compensation to the Allies. By 1923, the Weimar Republic as it had become known, was buckling because of the huge cost and in 1923 it stopped payments.

France promptly invaded the Rhineland, Germany’s most productive region, to force the reparation payments from Germany. Strikes were called and production ground to a near halt in the region.

The German Government resorted to printing money to pay its bills sparking a hyper inflation that destroyed the value of the currency and the savings of ordinary Germans as money lost all value. The rest, as they say, is history and an ugly one at that.

There are many reasons for the sorry state that the Zimbabwean economy is in today. High on the list is the Zanu PF Government’s tendency to print money like it is water to finance state spending.

As in Weimar Germany this has unleashed the horror of hyper-inflation – Zimbabwe has the highest inflation rate in the world, a terrifying 230 million per cent.

The revolutionary French government that seized control in 1789 printed money quicker than it chopped off the heads of the hated aristocracy.  It seemed the obvious means of paying off the massive debts racked up under the final years of the ancien regime.

All might have been well, if the government hadn’t yielded to cries for more to be printed – and more, and even more –  as soon as the freshly printed money was used.

The massive printing sparked inflation immediately – not something that is expected in the UK since the economy is so stagnant. Seven years later the French economy was in ruins, opening the door for Napolean to seize control and wage war across Europe. Vive la Revolution, I don’t think.

Japan’s attempt to flush itself out of recession by printing yen didn’t lead to disaster – in fact, it didn’t really lead to anything, which was its main problem. It did little to encourage Japanese banks to increase lending. Instead the banks, simply sat on the cash or lent it to overseas borrowers.

5 thoughts on “The dangers of printing money: four lessons from history”