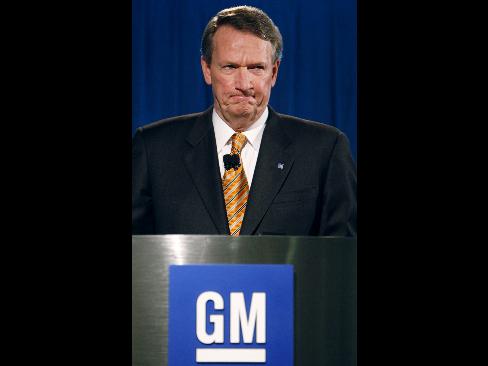 GM’s cumulative deficit ballooned to $82 billion since the end of 2004, when the biggest U.S. automaker last had an annual profit. Full-year sales fell 17 percent to $149 billion, damped by a recession that ravaged new-car demand, GM said today.

“The size of the loss matters not only because it impacts what it will cost to restructure the company, but also the kind of bill for which the taxpayer is on the hook,” said John Casesa, a managing partner at consultant Casesa Shapiro Group LLC in New York.

The future of Detroit-based GM may pivot on whether Wagoner, 56, is able to persuade President Barack Obama’s auto task force to approve as much as $16.6 billion in additional money on top of $13.4 billion in loans so far. Wagoner is meeting with the panel today in Washington.

Should the panel decide against extending more aid, GM’s only option may be a government-backed bankruptcy, because the company said Feb. 17 it would run out of cash without at least $2 billion more in loans next month.

Cash and cash equivalents totaled $14 billion on Dec. 31, down from $27.3 billion a year earlier and near the $11 billion minimum GM says it needs to pay bills. The task force meeting today is to answer questions, not to negotiate, Chief Financial Officer Ray Young said in a Bloomberg Television interview.

GM said its 2008 annual report is likely to include a “going concern” opinion from auditors, a sign of doubt about future viability, because the company doesn’t know whether it will receive new federal help, Young said on a conference call with reporters.

Such a declaration from auditors would be “a bit of a warning shot across the bow at the government and certainly those groups that they have yet to complete negotiations with,” said Kimberly Rodriguez, a principal at consulting firm Grant Thornton LLP in Southfield, Michigan.

The quarterly operating net loss a year earlier excluded results from the Allison transmission unit, which has been sold. With that unit, the 2007 fourth-quarter loss was $722 million, or $1.28 a share.

One-time costs last quarter totaled $3.7 billion, including a $1.1 billion related to writing down the assets of Hummer and Saab, two brands GM is seeking to shed.

For 2008, the automaker said it used $19.2 billion in cash for operations, an eightfold increase over 2007. The fourth- quarter total alone was $5.2 billion.

GM is “not pleased” with that level of spending, Young said on a call with investors. The finance chief said GM’s 2009 cash consumption is projected to be $14 billion and will be “front-loaded” toward the early part of the year.

On a combined basis, GM’s hourly and salaried pension plans are underfunded by $12.4 billion, according to the statement. No additional pension contributions are expected over the next three years, GM said. The company said it has taken a 15-day extension on filing its annual report.

A collapse in domestic sales and waning demand in overseas markets forced GM to announce plans for 47,000 job cuts in 2009, five more U.S. plant closings by 2012 and the sale or shutdown of Saab, Hummer and Saturn. GM is also paring pay for many salaried workers and seeking debt and labor concessions.

Today’s meeting with the autos task force comes as the panel is in “fact-gathering mode,” said CFO Young, who was to join Wagoner and Chief Operating Officer Fritz Henderson at the session. Chrysler executives met with the team yesterday, people familiar with those talks said.

Obama has said he wants to ensure the U.S. industry’s survival. While saying he wouldn’t protect the companies “from their own bad practices,” he told a joint session of Congress on Feb. 24 that “we are committed to the goal of a retooled, reimagined auto industry that can compete and win.”

GM and Chrysler submitted progress updates Feb. 17 to the U.S. Treasury to determine whether they can keep the current loans, qualify for more money and avoid bankruptcy. Final reports are due March 31.

Under GM’s plan, unsecured bondholders with $27.5 billion in debt are being asked to accept about $9.2 billion in debt and the rest in equity. GM wants the United Auto Workers to accept half of a $20.4 billion payment due next year for a union-run retiree health-care fund in equity, instead of all cash.

Ford Motor Co., which isn’t seeking U.S. aid, won a similar accord with the UAW this week. In its annual U.S. regulatory filing today, Ford said it has “no substantial doubt about our ability to continue” operating.