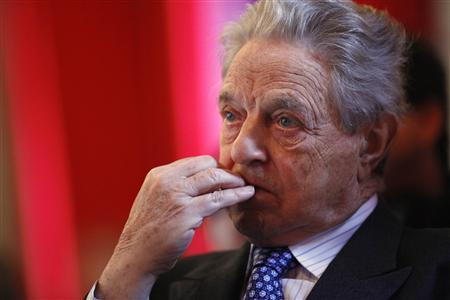 George Soros listens to economists speaking at the “Emerging from the Financial Crisis” annual conference at Columbia University, February 20, 2009.

NEW YORK (Reuters) – Renowned investor George Soros said on Friday the world financial system has effectively disintegrated, adding that there is yet no prospect of a near-term resolution to the crisis.

Soros said the turbulence is actually more severe than during the Great Depression, comparing the current situation to the demise of the Soviet Union.

He said the bankruptcy of Lehman Brothers in September marked a turning point in the functioning of the market system.

“We witnessed the collapse of the financial system,” Soros said at a Columbia University dinner. “It was placed on life support, and it’s still on life support. There’s no sign that we are anywhere near a bottom.”

His comments echoed those made earlier at the same conference by Paul Volcker, a former Federal Reserve chairman who is now a top adviser to President Barack Obama.

Volcker said industrial production around the world was declining even more rapidly than in the United States, which is itself under severe strain.

“I don’t remember any time, maybe even in the Great Depression, when things went down quite so fast, quite so uniformly around the world,” Volcker said.