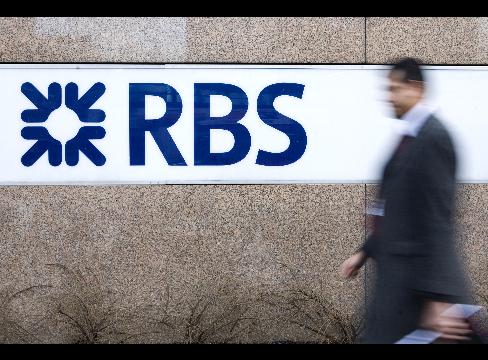 A pedestrian walks past the offices of the Royal Bank of Scotland in London, on Jan. 19, 2009. Photographer: Chris Ratcliffe/Bloomberg News

Feb. 18 (Bloomberg) — Royal Bank of Scotland Group Plc may give employees as much as 600 million pounds ($850 million) of bonds to supplement 2008 bonuses after the government-controlled lender said it cut the cash element of its incentive plan by more than 90 percent, a person familiar with the matter said.

The bank will give the bonds to employees as part of a deferred compensation plan, said the person, who wouldn’t be identified because the details haven’t been released. Edinburgh- based RBS will also give 165 million pounds to “lower paid” employees to replace a profit-share plan.

RBS said yesterday it would give workers 175 million pounds in cash payments, 90 percent less than 2.5 billion pounds paid for 2007. The lender last month reported a 28 billion-pound annual loss, the biggest by a British company. Governments across the world are putting pressure on financial services firms to limit pay after the industry racked up more than $1 trillion of losses in the credit crisis.

“All the additional bonuses that may be available are conditional on performance,” Prime Minister Gordon Brown told reporters at his monthly press briefing in London today. “There will be no rewards for failure.”

The deferred bonus payments will be made in RBS bonds created for the purpose over three years starting in 2010, said the person. The bonds can’t be sold for at least five years.

The government, which has been pressing banks to curb bonus payments, said last month it may increase its stake in RBS to 70 percent from 58 percent after injecting 20 billion pounds into the lender.

Any deferred award is subject to a clawback “if future losses arise in relation to their 2008 activities,” and is dependent on how many employees remain, RBS said yesterday.

Restrictions on bonuses may harm RBS’s competitiveness, wrote Ian Gordon, an analyst at Exane BNP Paribas in a note to investors today.

“Whilst widely popular with the British public, the potential lack of flexibility to recruit and/or retain key revenue generators is a concern in terms of the future development and performance of RBS’s businesses,” wrote Gordon who cut his rating on the stock to “neutral” from “outperform”.

RBS spokesman Neil Moorhouse declined to provide details beyond the bank’s statement yesterday. A Treasury spokesman was unavailable to comment. The Financial Times reported the plan for the additional payments earlier today.

To contact the reporter on this story: Jon Menon in London at jmenon1@bloomberg.net