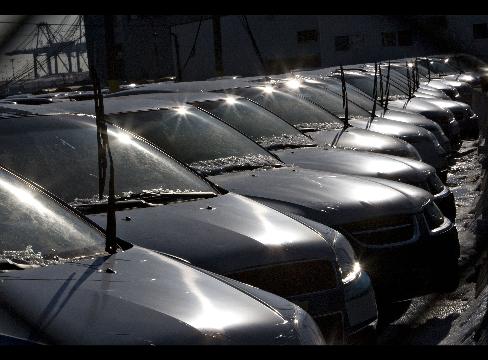 The company will cut pay for factory executives and eliminate bonuses for all salaried employees, Toyota said in an e-mailed statement late yesterday. The Toyota City, Japan-based carmaker is making further cuts in its assembly schedule for April, and creating a “job-sharing” program to reduce work hours at some plants, spokesman Mike Goss said.

Since passing General Motors Corp. in global sales last year, Toyota has forecast its first operating loss in 71 years as the global recession cripples demand for its Camry sedans and Tundra pickups. Toyota posted a 32 percent U.S. sales drop in January and has already announced plans to reduce output at its plants in the U.S., Canada and Mexico.

“Welcome to being No. 1,” said IHS Global Insight analyst Rebecca Lindland, who is based in Lexington, Massachusetts. “Toyota’s profile is now very similar to that of a Big 3 U.S. manufacturer, in terms of product. They’re running into some of the same issues in the downturn.”

At its U.S. sales headquarters in Torrance, California, Toyota has cut “a few hundred” temporary workers and frozen wages at the current level, spokesman Mike Michels said. Further steps may include the elimination of performance bonuses, Michels said.

The company is creating an optional program for employees who wish to leave voluntarily, Goss said. The buyout offers 10 weeks of pay plus two weeks of pay for every year of service, and a $20,000 lump-sum payment. Toyota has no numerical target for the buyout plan, Goss said.

Under the “work-sharing” program, production employees will work and be paid 72 hours instead of 80 during the two-week pay period, Toyota said.

“We’re not laying anybody off,” Goss, who is based in Erlanger, Kentucky, said.

The carmaker said Feb. 6 that its operating loss in the year ending March may total 450 billion yen ($4.94 billion) after earlier forecasting a 150 billion yen shortfall. Incoming President Akio Toyoda plans to replace most of Toyota’s top executives to tackle an auto industry crisis that has forced GM and Chrysler LLC to seek government aid.

“We’ve taken responsible, step-by-step actions to address this issue in recent months, and we hope the new measures will help us adjust, while protecting jobs,” Jim Wiseman, vice president of external affairs for Toyota’s North American engineering and manufacturing unit, said in the statement.

Toyota, which has cut its forecast three times in the last four months, is also hurt by a stronger Japanese currency. The yen’s 17 percent rise against the dollar and 18 percent jump against the euro in the last quarter of the year hurt the value of overseas earnings, cutting operating profit by 250 billion yen.

To contact the reporter on this story: Alan Ohnsman in Los Angeles at aohnsman@bloomberg.net