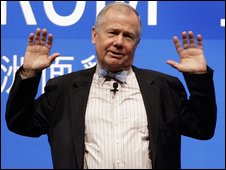 Billionaire Jim Rogers says that investors will have to short government bonds, soon, as the amount of federal debt issued is “staggering” and inflation risks are now emerging.

The CEO of Jim Rogers Holdings told CNBC that the low-rates policy promoted by central banks is soon going to deflate the bubble in government bonds.

“I was short long-term government bonds in the U.S., I had to cover a little loss because the head of the central bank said he was going to buy U.S. long-term bonds, and he’s got more money than I do,” Rogers said.

“I plan to sell short U.S. government long bonds sometime in the foreseeable future… I don’t know when, whether it’s this quarter or this year.”

The recent rise in the dollar was probably caused by short-sellers covering their other bets. However, the trend was unlikely to last long-term, Rogers said.

“There are huge short positions in the dollar, everybody is trying to cover. I’m not selling my yen yet, but it’s an artificial rally too. Government bonds may be the last bubble that is developing. I’m not short government bonds right now,” Rogers said.

“I sold all of my sterling, I wouldn’t buy sterling for the next 5 to 10 years. The same is happening to the U.S. economy, I’m not picking on the U.K.,” Rogers added.

Rogers said he is buying commodities for one major reason. “I know we’re going to have serious inflation down the road,” Rogers said.

There is concern that the “stimulus bill” that just passed the U.S. Senate today will cause other economic problems.

“Whether we are talking about the original House bill, the original Senate bill, or the so-called compromise bill, the stimulus is based on the backward and discredited idea that the country can spend itself out of a recession,” said Pat Toomey, president of the Club for Growth, in the National Review Online.