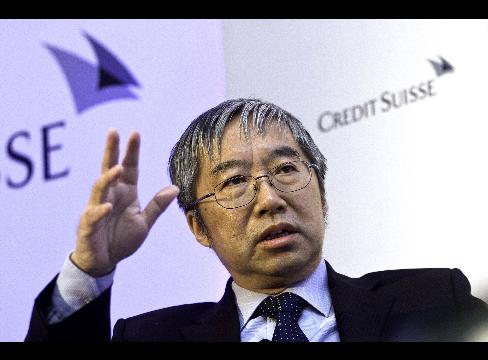 Yu Yongding, director-general at the Institute of World Economics and Politics at the Chinese Academy of Social Sciences, speaks during the 11th Asian Investment Conference in Hong Kong on March 31, 2008. Photographer: Jerome Favre/Bloomberg News

Feb. 11 (Bloomberg) — China should seek guarantees that its $682 billion holdings of U.S. government debt won’t be eroded by “reckless policies,” said Yu Yongding, a former adviser to the central bank.

The U.S. “should make the Chinese feel confident that the value of the assets at least will not be eroded in a significant way,” Yu, who now heads the World Economics and Politics Institute at the Chinese Academy of Social Sciences, said in response to e-mailed questions yesterday from Beijing. He declined to elaborate on the assurances needed by China, the biggest foreign holder of U.S. government debt.

China may voice its concerns over U.S. government finances and the potential for a weaker dollar when Secretary of State Hillary Clinton visits China on Feb. 20, according to He Zhicheng, an economist at Agricultural Bank of China, the nation’s third-largest lender by assets. A People’s Bank of China official, who didn’t wish to be identified, declined to comment on the telephone.

“In talks with Clinton, China will ask for a guarantee that the U.S. will support the dollar’s exchange rate and make sure China’s dollar-denominated assets are safe,” said He in Beijing. “That would be one of the prerequisites for more purchases.”

The dollar fell 0.6 percent to 89.96 yen today on concern that the U.S. government’s bank-rescue plan will fail to revive lending. Treasuries declined as investors prepared to bid for a record $21 billion sale of 10-year notes today. The yield on the benchmark 10-year note rose three basis points to 2.83 percent.

“These comments are some sort of a threat but of course China can never get such a guarantee,” said Thomas Harr, a currency strategist at Standard Chartered Plc in Singapore. The U.S. may assure China that it will clean up the financial system and that it “won’t push for a weaker dollar but they can’t promise not to increase the fiscal deficit,” he said.

U.S. government bonds returned 14 percent last year including price gains and reinvested interest, the most since rallying 18.5 percent in 1995, according to indexes compiled by Merrill Lynch & Co. Concern that the flood of bonds would overwhelm demand caused Treasuries to lose 3.08 percent in January, the steepest drop in almost five years, Merrill data show.

China’s loss of more than $5 billion from investing $10.5 billion of its reserves in New York-based Blackstone Group LP, Morgan Stanley and TPG Inc. since mid-2007 may increase its demand for the relative safety of Treasuries.

“The government will be a net buyer of Treasuries in the short term because there’s no sign they have changed their strategy,” said Zhang Ming, secretary general of the international finance research center at the Chinese Academy of Social Sciences in Beijing. “But personally, I don’t think we should increase holdings because the medium- and long-term risks are quite high.”

“The biggest concern for China to continue buying U.S. Treasuries is that if Obama’s stimulus doesn’t work out as expected, the Fed may have to print money to cover the deficit,” said Shen Jianguang, a Hong Kong-based economist at China International Capital Corp., partly owned by Morgan Stanley. “That will cause a dollar slump.”

China’s foreign-exchange reserves grew about $40 billion in the fourth quarter, the least since mid-2004, as an end to yuan appreciation since July prompted investors to pull money out.

Yu said China has no plans to channel its reserves toward stimulating its own economy because its trade surplus is sufficient to fund any import needs. China’s trade surplus was $39 billion in January.

China “should diversify its reserves away from U.S. Treasuries if the value of China’s foreign-exchange reserves is in danger of being inflated away by the U.S. government’s pump- priming,” he said.

China may try to link trade and currency policy disputes to its future investment in Treasuries, said Lu Zhengwei, an economist in Shanghai at Industrial Bank Co., a Chinese lender partly owned by a unit of HSBC Holdings Plc.

U.S. Treasury Secretary Timothy Geithner accused China on Jan. 22 of “manipulating” the yuan to give an unfair advantage to its exporters. The currency has dropped 0.16 percent this year to 6.8342 per dollar, following a 21 percent gain since a peg against the dollar was abandoned in July 2005.

“China can also use this opportunity to get a promise from the U.S. not to make inappropriate requests on bilateral trade and the Chinese yuan,” Lu said. “We can’t afford more yuan appreciation as the economy is facing a serious slowdown.”

To contact the reporters on this story: Belinda Cao in Beijing at lcao4@bloomberg.net; Judy Chen in Shanghai at xchen45@bloomberg.net.