The stimulus bill will cause an even greater deficit, that has to be financed.

When the expenditures of a government (its purchases of goods and services, plus its transfers (grants) to individuals and corporations) are greater than its tax revenues, it creates a deficit in the government budget; such a deficit is known as deficit spending. (Source: Wikipedia)

So according to Alan Greenspan Obama’s stimulus bill is a confiscation of wealth, your wealth. Obama is looting taxpayers’:

“Deficits mean future tax increases, pure and simple. Deficit spending should be viewed as a tax on future generations, and politicians who create deficits should be exposed as tax hikers.” – Congressman Ron Paul

This reckless spending will cause great problems in the very near future.

The truth is that…
– Peter Schiff: Stimulus Bill Will Lead to “Unmitigated Disaster”
– Jim Rogers: If Obamanomics happens it’s all over

The ‘Greatest Depression’ is coming and it is getting worse by the minute, thanks to the government and the Fed.

Congress, White House agree on a compromise $790B stimulus bill Obama could sign within days 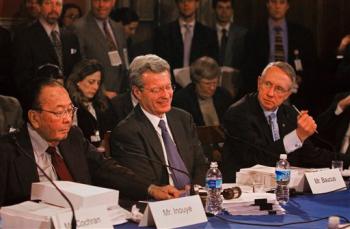 WASHINGTON (AP) – Moving with lightning speed, the Democratic-controlled Congress and White House agreed Wednesday on a compromise $790 billion economic stimulus bill designed to create millions of jobs in a nation reeling from recession. President Barack Obama could sign the measure within days.

“More than one-third of this bill is dedicated to providing tax relief for middle-class families, cutting taxes for 95 percent of American workers,” said Senate Majority Leader Harry Reid at a Capitol news conference where he was joined by moderates from both parties whose support is essential for the legislation’s final passage.

House Speaker Nancy Pelosi, D-Calif., Reid’s partner in negotiations over more than 24 intense hours, initially withheld her approval in a lingering disagreement over federal funding for school construction. “We had to make sure the investment in education” was in the bill, she said.

Obama, who has campaigned energetically for the legislation, welcomed the agreement in a written statement that said it would “save or create more than 3.5 million jobs and get our economy back on track.”

The emerging legislation is at the core of Obama’s economic recovery program.

The president’s signature tax cut was preserved – a break for millions of lower- and middle-income taxpayers of $400 per individual and $800 per couple. That’s less than the $500 and $1,000 the White House originally sought, although officials said it would mean an estimated $13 per week extra per paycheck.

Wage-earners who don’t earn enough to pay income taxes would get a reduction in the Social Security and Medicare taxes they pay.

The bill also includes help for victims of the recession in the form of expanded unemployment benefits, food stamps, health coverage and more, as well as billions for states that face the prospect of making deep cuts in school aid and other programs.

Another provision will mean a one-time payment of $250 for millions of beneficiaries who receive Social Security, Supplemental Security Income and veterans pensions and disability, according to officials. They added that the measure will include $46 billion for transportation projects such as highway, bridge and mass transit construction.

The bill “will be the beginning of the turnaround for the American economy,” predicted Sen. Joe Lieberman, the independent from Connecticut.

“It appears that Democrats have made a bad bill worse by reducing the tax relief for working families in order to pay for more wasteful government spending,” said Rep. John Boehner of Ohio.

But some prominent Republicans straddled the issue.

Alaska Gov. Sarah Palin, last year’s Republican running mate and a potential White House contender in 2012, said her state was ready to accept a projected $1 billion in federal funds if they make sense for the state. But she criticized increased spending on social programs, which she said could wind up costing her state in the long run and “don’t necessarily stimulate the economy.”

The events capped a frenzied 24-plus hours that began at midday Tuesday when the Senate approved its original version of the bill on a party-line vote of 61-37. Reid, Pelosi and White House Chief of Staff Rahm Emanuel plunged into a series of meetings designed to produce agreement in time for Obama to sign the bill by mid-month.

Pelosi was conspicuously absent from Wednesday’s news conference in which members of the Senate announced the agreement. Moments later, Reid arrived in her office, and the two talked by phone with Emanuel, according to officials who spoke on condition of anonymity.

Officials had said previously that one of the final issues to be settled was money for school modernization, a priority for Pelosi as well as Obama and one on which they differed with Collins and other moderates whose votes will be essential for final Senate approval.

Originally, Pelosi and House Democrats wanted a new program dedicated to school construction, but Collins held firm against that. In the end, officials said the agreement added flexibility to a $54 billion State Stabilization Fund, to permit local governments to use some of the money for modernizing school buildings but not building new ones.

There also was an unspecified last-minute change in a House proposal that would allow state legislatures to order the use of funds over the opposition of governors. Officials said that issue related in part to South Carolina, where GOP Gov. Mark Sanford has been a vehement critic of the legislation.

The officials who described the developments and elements of the bill did so on condition of anonymity, saying they were not authorized to speak.

Stocks moved higher in the moments after Reid stepped to the microphone just outside the Senate chamber. The Dow Jones industrials, which plunged 382 points on Tuesday, rose 51 points for the day.

Obama has been contending daily that the plan is essential to avoid turning what is already the worst economic crisis in a generation into a catastrophe.

As if to underscore the urgency, he said a few hours before the agreement was announced that machinery giant Caterpillar Inc. plans to rescind some of the 22,000 layoffs the firm recently announced – once the stimulus is signed into law.

Scaling back the bill to levels lower than either the $838 billion Senate measure or the original $820 billion House-passed measure caused grumbles among liberal Democrats, who described the cutbacks as a concession to the moderates, particularly Sen. Arlen Specter, R-Pa., who are under pressure from conservative Republicans to hold down spending.

Working to accommodate the new, lower overall limit of the bill, negotiators effectively wiped out a Senate-passed provision for a new $15,000 tax credit to defray the cost of buying a home, these officials said. The agreement would allow taxpayers to deduct the sales tax paid on new car purchases, but not the interest on loans for the same vehicles.

With numerous demands for the funds in the bill, lawmakers worked to satisfy competing demands.

A Senate-passed provision to give $10 billion to the National Institutes of Health for research – a favorite of both Sen. Tom Harkin, D-Iowa, and Specter – appeared to have survived.

Not every decision was driven by concern about job creation, though.

The bill includes $70 billion to shelter wealthier taxpayers from the alternative minimum tax, originally passed a generation ago to make sure the super-rich didn’t avoid taxes. The Congressional Budget Office estimates that provision will have relatively little impact on the economy.

1 thought on “Congress, White House Agree on $790B Stimulus Bill”