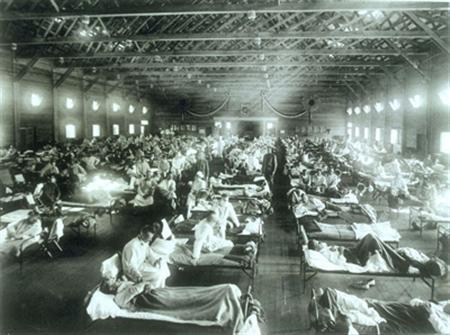 An emergency hospital at Camp Funston, Kansas, for soldiers sickened by the 1918 flu.
REUTERS/National Museum of Health and Medicine/Armed Forces Institute of Pathology/Handout

WASHINGTON (Reuters) – Strep infections and not the flu virus itself may have killed most people during the 1918 influenza pandemic, which suggests some of the most dire predictions about a new pandemic may be exaggerated, U.S. researchers said on Thursday.

The findings suggest that amassing antibiotics to fight bacterial infections may be at least as important as stockpiling antiviral drugs to battle flu, they said.

Keith Klugman of Emory University in Atlanta and colleagues looked at what information is available about the 1918 flu pandemic, which killed anywhere between 50 million and 100 million people globally in the space of about 18 months.

Some research has shown that on average it took a week to 11 days for people to die — which fits in more with the known pattern of a bacterial infection than a viral infection, Klugman’s group wrote in a letter to the journal Emerging Infectious Diseases.

“We observed a similar 10-day median time to death among soldiers dying of influenza in 1918,” they wrote.

People with influenza often get what is known as a “superinfection” with a bacterial agent. In 1918 it appears to have been Streptococcus pneumoniae.

“Neither antimicrobial drugs nor serum therapy was available for treatment in 1918,” Klugman’s team wrote.

Now there are also vaccines that protect against many different strains of S. pneumoniae, which cause infections from pneumonia to meningitis.

Most health experts agree that another pandemic of influenza is inevitable. There were smaller pandemics in 1958 and in 1967.

Many government projections have been based on a worst-case 1918 scenario, in which tens of millions of people would die globally and up to 40 percent of the work force would be out for weeks, either sick, caring for others who are sick, or avoiding public places for fear of infection.

“Based on 1918 we would project less mortality in an era of antibiotics,” Klugman said in an e-mail.

“We -are currently modeling this — assuming of course that the bacterial superinfections remain susceptible to the antibiotics and that sufficient antibiotics are available.”

No one knows when a pandemic of flu might strike. Every year seasonal influenza kills between 250,000 and 500,000 people.

A pandemic occurs when a new strain of flu begins infecting people. One big fear is that H5N1 influenza, currently infecting many birds in Asia, Europe and Africa, might make the jump to people.

H5N1 currently infects people only rarely but it has killed 254 out of 405 infected since 2003, according to the World Health Organization. Many countries and companies are stockpiling antiviral drugs and vaccines in case it does strike.
( … but Tamiflu resistance is close to 100% already!)

(Editing by Will Dunham and Xavier Briand)