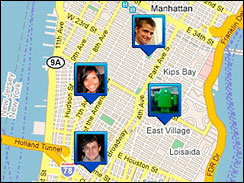 (CBS) Google is releasing free software Wednesday that enables people to keep track of each other using their cell phones.

CNET got a sneak peek at it, and CNET-TV Senior Editor and Early Show contributor Natali Del Conte explained how it works on the show Tuesday.

She says “Latitude” uses GPS systems and what’s called cell tower triangulation to do the job. The software seeks the closest three cell towers and, with GPS, combines the data to show where someone is.

It is designed to work on any phone with Internet capabilities, except the iPhone.

“Latitude” is being marketed as a tool that could help parents keep tabs on their children’s locations, but it can be used for anyone to find anyone else, assuming permission is given.

CNET points out that, “To protect privacy, Google specifically requires people to sign up for the service. People can share their precise location, the city they’re in, or nothing at all.”

“What we found in testing,” Lee added to CNET, “is that the most common scenario is a symmetrical arrangement, where both people are sharing with each other.”

For complete details from CNET on “Latitude,” click here.

But how accurate is “Latitude”?

Del Conte found a family willing to give it a try. The results? Mixed:

The family lives in an area with spotty cell phone reception, Del Conte points out. They found that, if they went to more urbanized areas, the accuracy of the program increased.