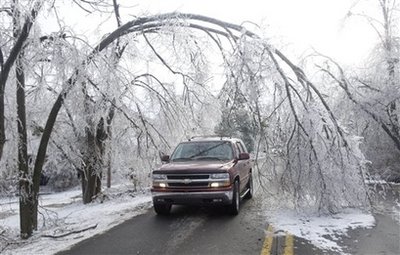 A vehicle drives under a tree that is weighed down by ice on Old Wire Road as a result of wintry weather on Wednesday Jan. 28, 2009, in Fayetteville, Ark. (AP Photo/Beth Hall)

LOUISVILLE, Ky. – More than a million homes and businesses were left in the cold without power Thursday in the wake of an icy winter storm could face a lengthy wait for electricity to come back, even as federal help was promised to two states hit hardest by the blast.

At a mall turned into a staging area in Barboursville, W.Va., crews in hard hats met alongside piles of poles, generators, wire and other supplies to find out where to go first. A convoy with crews from as far away as North Carolina was there to help.

“We’re attacking it head on,” said Appalachian Power spokesman Phil Moye. “As long as the ice is still on the trees, the storm is still here.”

Utility officials estimated more than 1.3 million homes and businesses from Arkansas to Ohio were powerless, and warned it could be mid-February before some customers had power.

Various charities opened shelters across the region, but with the power out nearly everywhere – including at some radio stations – it was difficult to spread the word. Some deputies went door to door and offered to drive the elderly to safety.

Some huddled next to wood-burning fires and portable heaters to fend off the frigid air. Communities urged people to conserve water because the outages could limit supplies. Those who stayed put in their homes relied on gas stoves to cook food, and emergency officials feared the crisis could escalate as temperatures plunged.

“I’m so worried that we’re going to have a death due to hypothermia or carbon monoxide,” said John Robinson, the severe weather coordinator for the National Weather Service at North Little Rock, Ark. Space heaters, if improperly used, can generate dangerous levels of carbon monoxide.

In Boone County, Ark., Sheriff Danny Hickman said the jail lost power and its generator failed. The lockup’s 23 inmates had to be moved to other jails until utility service returns.

The storm has been blamed for at least 24 deaths so far. Kentucky officials Thursday added two that they called weather-related: A woman who died while an ambulance on the way to her was blocked by impassable roads and a woman who fell on her basement stairs while she was retrieving a kerosene heater. A woman in Indiana died while shoveling snow.

Tony Cipolla managed to keep warm by building a fire at his powerless home near Seneca Park in Louisville, cooking a pot of soup over a gas stove. But there wasn’t a long-term plan for Cipolla and his two children, ages 5 and 9, if electricity wasn’t soon restored.

“If it’ll be a couple days, then we’ll be in trouble,” Cipolla told The Courier-Journal in Louisville, where temperatures dipped into the 20s overnight.

More than a half-million were without power in Kentucky, where the power outages produced by the ice storm were outdone only by the remnants of Hurricane Ike, which lashed the state with fierce winds last year, leaving about 600,000 customers without power.

“We’ve got lots of counties that do not have any communication, any heat, any power,” Beshear, the state’s governor, said Wednesday.

Kyle Brashears’ family rode out the storm in their Mountain Home, Ark., home before fleeing to relatives after half an ice-caked oak tree fell into their home.

“It caved the roof in and ripped the gutter off, although it didn’t penetrate inside,” he said. “I was walking around outside until about 1 a.m. and it was just a nonstop medley of tree limbs cracking off.”

After building in Texas and Oklahoma on Monday, the storm moved east, finally dumping more than a foot of snow in some parts of New England. Except for school cancellations and some airline delays and cancellations, the storm lost steam as it moved east.

In Ohio, passengers on an AirTran Airways flight were held up to 10 hours before finally taking off. Travelers in Columbus boarded Flight 373 for Orlando at a little before 7:30 a.m. Wednesday. Passengers say it took more than four hours for the plane to push out of the snow at the gate, then were delayed even more when deicing wouldn’t work as freezing rain and snow fell.

People were allowed off the plane at lunchtime, then got back on board and sat for several more hours until AirTran gave up on the deicing and brought in another plane, passenger Tiara Berger said. AirTran spokesman Tad Hutcheson said the flight probably should have been canceled, and that the passengers will receive free roundtrip tickets.