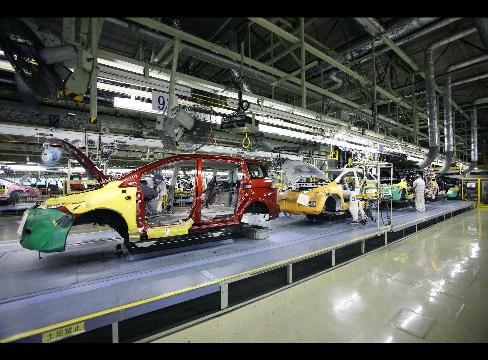 “Japan’s economy is falling off a cliff,” said Junko Nishioka, an economist at RBS Securities Japan Ltd. in Tokyo. “There’s really nothing out there to drive growth.”

The International Monetary Fund said this week that Japan’s gross domestic product will shrink 2.6 percent this year, the bleakest projection for any Group of Seven economy except the U.K. That contraction would be Japan’s worst since World War II.

“We’re in a very grave situation,” Economic and Fiscal Policy Minister Kaoru Yosano said in Tokyo today. “Japan is being hit by this wave of weakening global demand.”

Parliamentary gridlock has stymied the ruling Liberal Democratic Party’s efforts to pass a 10 trillion yen ($111.2 billion) stimulus package. The Bank of Japan, which last month lowered interest rates to 0.1 percent, has little room to counter the slump other than by purchasing corporate debt to ease a credit squeeze, which it started to do today.

“The numbers are just horrendous,” said Tehmina Khan, an economist at Capital Economics Ltd. in London. “In Japan the political problems and the gridlock that they’ve got means they are totally unable to stimulate the economy.”

Hitachi forecast a 700 billion yen ($7.8 billion) annual loss and said it may eliminate 7,000 jobs. NEC reversed its full- year projection to a loss of 290 billion yen as demand for chips plunged and the value of its shareholdings tumbled.

“It’s getting scarier and scarier to ponder what will happen around March,” when the fiscal year ends, said Hiroshi Morikawa, a senior strategist at Tokyo-based MU Investments Co. “Deeper cuts in capital investment and workforces will probably be needed.”

The month-on-month decline in production was steeper than the 8.9 percent economists predicted and the biggest since the figures were first compiled in 1953. Companies planned to lower output a further 9.1 percent in January and 4.7 percent in February.

“There’s a global synchronized recession and manufacturers are responding aggressively,” said Jan Lambregts, head of Asian research at Rabobank International in Hong Kong. “That’s going to have a profound impact” on economic growth.

The Nikkei sank 3.1 percent today, adding to last year’s record 42 percent drop. The yen traded at 89.45 per dollar from 89.99 before the economic reports were published. The currency’s 18 percent gain in the past year has compounded exporters’ woes by eroding the value of their profits earned overseas.

“The jobless rate could rise to around 5 percent, giving us more reasons not to expect consumer spending to support the economy,” said Noriaki Matsuoka, an economist at Daiwa Asset Management Co. in Tokyo.

Nishioka at RBS estimated GDP fell at an annual 14 percent pace from October through December. That would exceed a 13.1 percent drop in the first quarter of 1974 to become the sharpest on record. Economists predict a report later today will show the U.S. economy, Japan’s biggest market, shrank an annualized 5.5 percent pace last quarter, the biggest drop since 1982.

The slump may last more than three years and exceed the 1980 to 1983 downturn to become the longest on record, according to Hiroshi Yoshikawa, a Tokyo University professor who heads a government panel that dates the economic cycle. The panel yesterday said the recession began in November 2007.