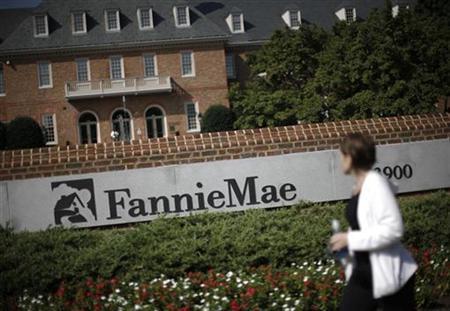 The headquarters of mortgage lender Fannie Mae is shown in Washington September 8, 2008. REUTERS

NEW YORK (Reuters) – Fannie Mae and Freddie Mac could tap the government for up to $51 billion in coming weeks, exceeding some Wall Street estimates, so they can continue to operate as the largest providers of funding for U.S. residential mortgages.

The storm of rising delinquencies and falling securities values that led to the government’s seizure of the companies in September accelerated in the last quarter, requiring Fannie Mae and Freddie Mac to seek more of the stop-gap measures organized by the U.S. Treasury and their regulator. Analysts predicted more capital needs from Treasury through 2009.

Fresh losses in the most recent quarter will probably be the harshest on Freddie Mac, which holds a larger portfolio of risky mortgage securities, including subprime bonds. The McLean, Virginia-based company said on Friday it may have to seek $30 billion to $35 billion in capital from the Treasury in the form of senior preferred stock.

Washington-based Fannie Mae said late on Monday that the Federal Housing Finance Agency, the regulator, may request $11 billion to $16 billion, based on estimates for fourth-quarter results.

Signs of larger losses underscore the importance of the Obama administration’s measures to halt foreclosures that are feeding a downward spiral in the housing market, already in its worst downturn since the Great Depression. Until the declines in house prices are broken, the cycle will continue and the economic recession could get worse, economists said.

QUESTIONS ABOUT LOSSES AND RESERVES

Fannie Mae could see greater losses through 2009 than Freddie Mac from guarantees on mortgage-backed securities, according to analysts, including Rajiv Setia of Barclays Capital in New York.

The companies have provisioned for just a third of cumulative losses on guarantees of $45 billion and $80 billion, respectively, he said.

“The questions are the source of the losses and how much is set aside in reserves for future losses,” said Jim Vogel, a strategist at FTN Financial in Memphis, Tennessee, in a note to clients. “Both will determine, along with further housing performance, the size of the draw at the conclusion of the first quarter.”

Fannie Mae and Freddie Mac guarantee or own nearly half of all U.S. mortgages.

After taking about $14 billion from the Treasury last year, Freddie Mac would be using about half of its $100 billion Treasury lifeline. Other funding sources have shriveled in the credit crunch, enhancing the importance of liquidity from Freddie Mac, Fannie Mae and the 12 Federal Home Loan Banks, some of which are facing capital shortfalls of their own.

Fannie Mae and Freddie Mac are also fighting a headwind of unrealized losses on interest-rate derivatives they use to hedge their mortgage portfolio, Moshe Orenbuch, a strategist at Credit Suisse, said in a research note on Monday.

What’s more, proposed legislation that would make it easier for a bankruptcy judge to tear up mortgage contracts has hurt the value of securities, he said. That could add $20 billion to the Treasury’s costs of buoying the companies, he added.

Treasury injections may keep the companies operating as government entities for years, as they struggle to service costs and provide money for housing, Setia said in a conference call last week. Before conservatorships, Fannie Mae and Freddie Mac operated as quasi-governmental “agencies” that benefited from congressional charters, but answered to shareholders.