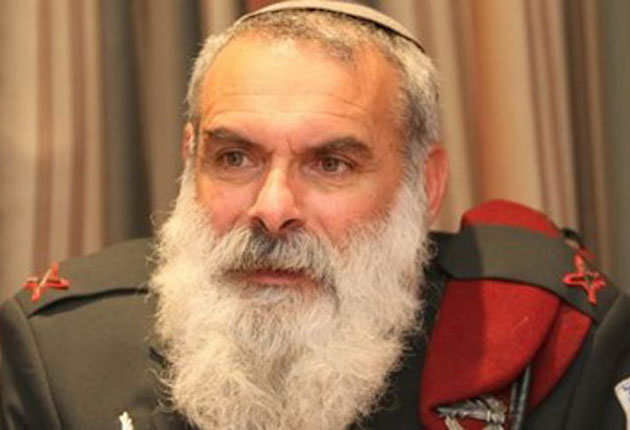 The Israeli army’s chief rabbinate gave soldiers preparing to enter the Gaza Strip a booklet implying that all Palestinians are their mortal enemies and advising them that cruelty is sometimes a “good attribute”.

The booklet, entitled Go Fight My Fight: A Daily Study Table for the Soldier and Commander in a Time of War, was published especially for Operation Cast Lead, the devastating three-week campaign launched with the stated aim of ending rocket fire against southern Israel. The publication draws on the teachings of Rabbi Shlomo Aviner, head of the Jewish fundamentalist Ateret Cohanim seminary in Jerusalem.

(“My Fight” can be literally translated into German as “Mein Kampf” (Adolf Hitler).

Related article: UN council urged to look at Israel’s conduct in Gaza (Reuters):
Richard Falk, a special U.N. investigator sent to the Middle East by the Geneva-based U.N. Human Rights Council, has said there was evidence that Israel committed war crimes in the Gaza Strip and there should be an independent inquiry.

Falk, who is Jewish, has compared the situation in Gaza to that of the Warsaw Ghetto during the World War Two, where the Nazis systematically starved and murdered Jews. Israel denies committing any war crimes during its assault on Gaza.

In one section, Rabbi Aviner compares Palestinians to the Philistines, a people depicted in the Bible as a war-like menace and existential threat to Israel.

In another, the army rabbinate appears to be encouraging soldiers to disregard the international laws of war aimed at protecting civilians, according to Breaking the Silence, the group of Israeli ex-soldiers who disclosed its existence. The booklet cites the renowned medieval Jewish sage Maimonides as saying that “one must not be enticed by the folly of the Gentiles who have mercy for the cruel”.

Breaking the Silence is calling for the firing of the chief military rabbi, Brigadier-General Avi Ronzki, over the booklet. The army had no comment on the matter yesterday.

Rabbi Arik Ascherman, the executive director of the Rabbis for Human Rights group, called the booklet “very worrisome”, adding “[this is] a minority position in Judaism that doesn’t understand the … necessity of distinguishing between combatants and civilians.”