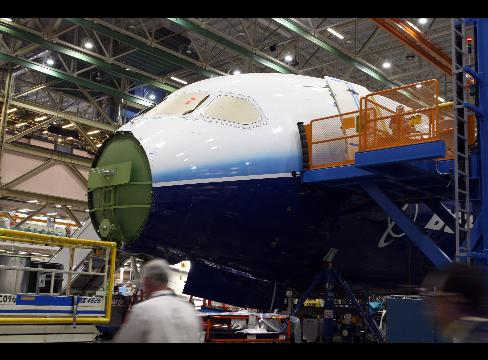 The first Boeing Co. 787 airplane is assembled at the company’s manufacturing plant in Everett, Washington on May 19, 2008. Photographer: Kevin P. Casey/Bloomberg News

Jan. 28 (Bloomberg) — Boeing Co. said it plans to cut 10,000 jobs, or about 6 percent of its workforce, after a strike and program delays led to a fourth-quarter loss and a global recession began to erode demand for aircraft.

The job reductions, disclosed on a conference call today, include 4,500 that were previously announced in the commercial- plane half of Boeing’s business. Earlier the Chicago-based company reported a net loss of $56 million, or 8 cents a share, after a year-ago profit.

Boeing faces a potential increase in canceled or deferred orders this year as airlines cope with a drop in travel demand and tight credit. Almost a third of the world’s carriers are likely to defer deliveries this year, up from 8 percent three months ago, a survey released last week by UBS Investment Research showed.

The planemaker also must carry development costs on the delayed 787 Dreamliner, which is now due to reach the first customer in early 2010, about two years later than planned. An eight-week machinists strike that ended Nov. 2 added to the delays and stripped $1.8 billion from full-year earnings.

The company delivered 50 aircraft in the quarter, 70 fewer than planned, hurting revenue by $4.3 billion and setting it further behind rival Airbus SAS, the only larger commercial-plane maker. Boeing is also the second-largest defense contractor.

Boeing said today it plans to deliver 480 to 485 planes this year, less than its July estimate of 500 to 505, and may have to provide $1 billion in financing to customers. It shipped 375 planes last year, below its earlier plan of at least 475.

Boeing announced 4,500 job cuts in the commercial business on Jan. 9, mainly at its manufacturing hub in Washington state. Boeing, which has a record $279 billion backlog of plane orders to fill, said at the time that the job cuts would start in February and focus on areas not directly associated with aircraft production.

Through yesterday, U.S. companies had announced more than 519,895 job cuts since Nov. 1, according to Bloomberg data. Newly elected President Barack Obama has proposed a plan to create as many as 4 million jobs to boost the economy.

The 5,500 new job cuts announced today will be spread out over the year, with an emphasis on the first half, and will come from support services, corporate functions and the defense side of the business, McNerney said. Any charges expected for the reorganization are included in the company’s forecast, he said.

To contact the reporter on this story: Kevin Miller in Chicago at kmiller@bloomberg.net