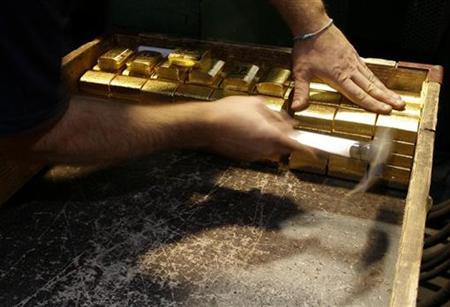 An employee uses a hammer to store pre-cast bars of gold in a box at a plant of bar manufacturer Argor-Heraeus SA in the southern Swiss town of Mendrisio. REUTERS/Arnd Wiegmann/Files

NEW YORK/LONDON (Reuters) – Gold climbed above $900 an ounce on Monday to the highest level in more than three months as interest in bullion as a haven from risk and a weaker dollar against the euro spurred buying.

Gold priced in euros reached an all-time high of 701.55 an ounce, and in sterling of 661.55 pounds, as fears over the global economic slowdown and volatility in other asset prices spurred buying.

“Gold is rising on the fallout from the renewed banking crisis,” said VM Group analyst Matthew Turner. “The banking crisis is bad for share prices and creates fear and panic. Some investors are thinking gold is the safest option.”

The dollar, weakness in which usually benefits gold, also softened against the euro on Monday as the single currency recovered from a nearly six-week low against the U.S. unit earlier.

Robert Lutts, president and chief investment officer of Cabot Money Management, said he expected gold could rise to $2,000 an ounce over time as investors sought to protect their assets.

“The central banks are printing trillions of dollars worth of currencies, and there is no real asset behind it. So, every dollar in my pocket is going to be worth less and less every day,” said Lutts, who oversees $400 million of client assets.

The trust’s bullion holdings have climbed more than 52 metric tons, or nearly 7 percent, since the beginning of the year.

A Reuters biannual poll of analysts’ price forecasts showed most expect gold prices to hold their ground this year, though platinum, palladium and silver prices are seen falling.

The poll showed a median gold price forecast for this year of $862.50 an ounce, up 3.5 percent from the median 2009 forecast in Reuters’ last regular survey in July, and down only marginally on last year’s average price of $871.21 an ounce.

Reuters’ precious metals poll showed little consensus on the supply and demand balance for platinum in 2009, with forecasts ranging from a surplus of more than half a million ounces to a deficit of 140,000 ounces.

Analysts disagree on how much demand will fall this year, and how far producers can scale back output in response to lower output.