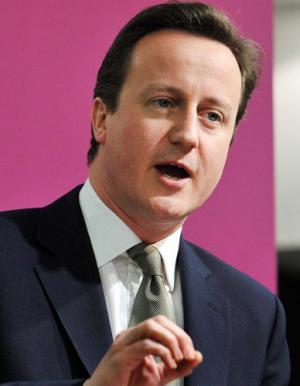 David Cameron: ‘If we continue on this path the money will run out’ (PA)

Britain risks bankruptcy and a humiliating bailout by the International Monetary Fund (IMF) because of Gordon Brown’s borrowing, David Cameron said yesterday. With official confirmation that the economy has entered recession expected today, the Tory leader delivered his strongest warning yet: “If we continue on Labour’s path of fiscal irresponsibility, at some point – and it could be very soon – the money will simply run out.”

His speech to the Demos think-tank in London raised the spectre of the 1976 bailout, when James Callaghan’s Labour government was forced to make deep public spending cuts in return for a £2.3bn loan from the IMF.

His remarks are bound to provoke Labour accusations that he is running the country down. Mr Cameron insisted he was not predicting a date by which the Government would “end up back at the IMF”. But he added: “What I am saying is that we are running the risk of those things happening and those are risks that no government should responsibly run.”

The Tory leader added: “We are borrowing, according to the Government’s current estimates, 8 per cent of our GDP in the next financial year. That is the same percentage that Denis Healey [the then chancellor] was borrowing when he went to the IMF in 1976.”

In his speech on “progressive conservatism,” Mr Cameron suggested that an incoming Tory government would not adopt Thatcher-style spending cuts which could “give rise to anger, hurt and social division,” but would address the economic problems “in a way that brings the country together, not drives it apart”.

As in 1976, investors’ concerns are putting sterling under severe selling pressure. So far the depreciation of the pound – down to 23-year lows against the dollar and the subject of discussions within the G7 – has failed to bring in more export orders. UK car production has slumped 47 per cent on last year, it was revealed yesterday.

The human costs of the downturn are being laid bare. Repossessions almost doubled in the third quarter of last year, according to the Financial Services Authority. A total of 13,161 properties were reclaimed by banks and building societies during the three months to the end of September – 92 per cent more than during the same period of 2007, with arrears also escalating. An increasing number of families are turning to their local authorities to house them, with the number on council waiting lists now 1.77 million – up 100,000 on last year.

“With the banks overstretching their credit facilities, it could mean that in the coming months that councils will have to help pick up the pieces,” the Local Government Association’s housing spokesman, Paul Bettison, said.

Shelter’s chief executive Adam Sampson added: “The rescue schemes announced by the Government recently will help just a fraction of those in trouble. Since Labour took power 12 years ago, the council house waiting list has risen from 1 million to almost 1.8 million, showing this Government has failed to build anywhere near the number of social homes Britain desperately needs.”

Matters are unlikely to improve while business confidence remains low. The CBI’s latest industrial trends survey shows confidence at its lowest ebb since 1980. Some 16 years of continuous growth shuddered to a halt in the second quarter of 2008, the economy shrank by 0.6 per cent between July and September, and the decline is expected to have accelerated to between 1 and 1.5 per cent in the closing months of 2008.

The economy is expected to stumble further during 2009 – by as much as 2.8 per cent, according to the European Commission forecast on Monday. The Governor of the Bank of England, Mervyn King, declared earlier this week that the world economy had “fallen off a cliff” in recent months, a verdict few seem ready to dispute.