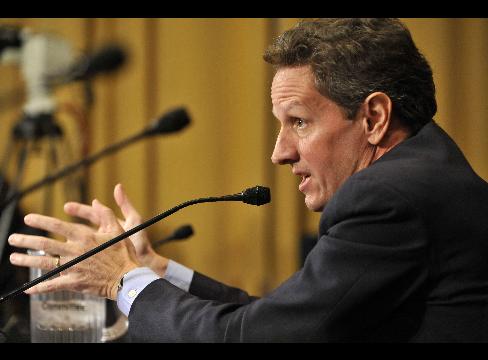 Jan. 23 (Bloomberg) — Treasuries fell, with 30-year bonds posting the biggest weekly loss in almost 22 years, on concern that debt sales will increase as the government boosts spending to ease the deepening economic slump.

“Supply is a concern for this year,” said Michael Pond, interest-rate strategist in New York at Barclays Capital Inc., one of 17 primary dealers required to bid at U.S. debt auctions. “We are approaching the refunding period where we will get long-dated issuance, so it’s not surprising that it is weighing on investors’ minds.”

The benchmark 10-year note yield, used to set corporate borrowing costs and mortgage rates, rose one basis point to 2.61 percent. It touched 2.68 percent, the highest since Dec. 12. The note’s yield increased 28 basis points this week, the most since the five days ended June 13.

The increase in yields has been overdone in the face of an economy that remains weak and Federal Reserve officials who have said they may buy Treasuries if long-term yields rise too much, Pond said. Ten-year rates will fall to 2.42 percent by March 31, according to the median forecast of 62 economists in a Bloomberg News survey.

Longer-term Treasuries sold off amid concern that debt sales will increase to pay for Obama’s economic stimulus plan, expected to cost $825 billion, and a budget deficit expected to grow to more than $1 trillion.

Obama pressed congressional leaders today to reach a consensus on the plan, warning the U.S. may be facing an “unprecedented” economic crisis. The president said that while there are “some differences” between his administration and lawmakers on details, the legislation is “on target” for passage by mid-February.

Timothy Geithner, Obama’s nominee for Treasury secretary, pledged Jan. 21 an expanded and prolonged government role in everything from stabilizing banks to ensuring credit for small businesses.

The Treasury said that next week it will sell $78 billion in two- and five-year notes and 20-year Treasury Inflation Protected Securities, or TIPS.

The government will likely sell $66 billion in three-, 10-, and 30-year securities next month in the Treasury’s quarterly refunding, equal to an estimated $62.5 billion in 10-year duration equivalents, according to David Ader, head of U.S. interest-rate strategy at Greenwich, Connecticut-based RBS Greenwich Capital Markets, another primary dealer.

“We’re facing the largest sale of 10-year equivalents ever with the refundings ahead,” Ader said. “Supply is going to be the most challenging thing we’ll have to deal with.”

Concern supply will swell caused shorter-term securities to outperform longer-term notes and bonds this week. The difference between the yields on two- and 10-year notes grew by 20 basis points to 1.79 percentage points, the widest it has been since the week ended Dec. 12. The broadening came even as investors expected the gap to narrow with the prospect of the Fed buying longer-term U.S. debt.

Thirty-year bonds have lost 9.3 percent this year as investors bet the government’s efforts to spur the economy by borrowing will ultimately lead to inflation, according to Merrill Lynch & Co.’s indexes.

“Historically, when we have seen supply and demand concerns arise it generally hits the long end more,” said Suvrat Prakash, an interest-rate strategist in New York at BNP Paribas Securities Corp., another primary dealer. “It is concern about the long term and how will the Treasury be able to keep rates low with so much issuance, but there are also arguments that it feeds inflation.”

The difference between rates on 10-year notes and TIPS, which reflects the outlook among traders for consumer prices, widened to a nine-week high of 72 basis points.

The so-called real yield, or what investors get from 10- year notes after inflation, reached a 16-month high of 2.55 percent. Consumer prices rose 0.1 percent for all of 2008, after increasing 4.1 percent the previous year, Labor Department figures show.

The holdings of Treasury securities maturing in more than 11 years among primary dealers rose to $8.3 billion in the week ended Jan. 14, according to the U.S. central bank. The level is close to the highest since it reached $9.6 billion the week ended Sept. 25, 2002.

“The high level of inventory in coupons suggests a very grim backdrop,” UBS Securities LLC strategists led by Chris Ahrens wrote in a note to clients today. “We suspect that counterparties looking to sell positions into this capital- constrained universe are finding that dealers are not willing to bid aggressively to add to already-burgeoning positions.”

To contact the reporters on this story: Dakin Campbell in New York at dcampbell27@bloomberg.net